To Rougemont for Thanksgiving

To Rougemont for Thanksgiving

Milly didn’t seem at all tired until about 11:30 this morning so she only got to nap for about an hour, since we packed everything up once Amanda got home and left for Rougemont to celebrate Thanksgiving tomorrow with my family.  Amanda and I worried that the lack of sleep would make for a cranky car ride, but it wasn’t bad.

We did forget to get some games we wanted to take (including my Xbox for I could play Assassin’s Creed as time allowed, but I forgot half of the power cord so that was moot), so we had to go back to the house for them.  Otherwise it was a mostly uneventful trip. 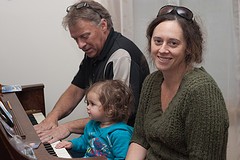 We got to Rougemont around 4:00.  Dad, Mom, Erin and Aunt Robbie were there.  Milly took to everyone pretty fast, although she wasn’t sure about Aunt Robbie at first.  Milly loves playing on pianos, so she, Erin and Dad did that for a bit.  Later on she danced for us to the sounds of the Winnie the Pooh riding toy (whatever you call it).  We marveled at how much good use that toy has gotten, since it was originally Jackson’s when he was little and he’ll be six in a month.

Amanda and I had brought some chicken pot pie that Amanda made earlier this week for dinner.  She’d made two of them and we’d only eaten one and we didn’t want it to go to waste.  Afterwards, Amanda and I went to Wal-Mart to get birthday presents for my sister’s kids, Addison (whose birthday was two weeks ago) and Jackson.  As I just mentioned, Jackson’s birthday is next month, but I wanted to give it to Andra or Josh so he could get it on his actual birthday, instead of receiving it whenever we see him for Christmas, like we usually do.

Milly was pretty happy the whole evening.  We finally put her down at about 8:30 in Erin’s room.  When I discussed sleeping arrangements with Erin she’d said Amanda and I could have her room since it has the crib in it, and she’d sleep in another room.  Amanda joked that Erin could just sleep with Milly, which Erin said was fine with her.  I kept telling her it was a joke, but she kept saying she was fine with it, so Milly is sleeping with her Auntie Rin tonight while Amanda and I sleep in my old room.

In basketball news, UConn beat #9 Kentucky pretty handily in the NIT pre-season tournament after upsetting #2-ranked Michigan State.  The Huskies were unranked, but I’m betting that changes in the next poll.

Also, after Duke drank Kansas State’s milkshake the other day and Carolina had to scrape out a win against UNC-Asheville, Tar Heels fans are pretty demoralized and finally admitting how good this Duke team is looking.