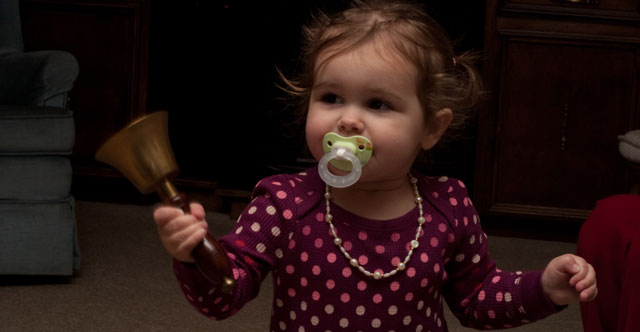 I ran out to pick up a couple things- cat food, a last minute gift for Amanda’s grandpa, this morning.  While I was out I decided to call some of our friends to wish them a merry Christmas.  I was originally going to do it tomorrow, but with all that would be going on for everyone, whether visiting with families, celebrating Christmas with their kids or traveling, I figured I’d go ahead and take care of some of it today.

Milly was up from her morning nap not too long after I got home.  Amanda put her in a new dress, which was adorable in and of itself, but then, as sort of a Christmas present to me because it’s a bit of a pain, Amanda gave Milly twin pigtails.

We left and went to Atlanta Bread for lunch.  Mike Nowak had mentioned earlier that and his crew were going to be at Mayfaire, so I called them and they stopped by before we finished eating to visit for a few minutes before we all headed off to Port City Community Church.

Oh, I forgot to mention that on the way to Atlanta Bread, Milly and I went over the names of a bunch of relatives and friends.  She was able to say (many of them pretty clearly) Mommy, Daddy, Nana, Paw Paw, Mum Mum, Pap, Auntie Rin, Adam, Aunt Dra, Josh, Jackson, Addison, Michael, GG, GP, Anna, Barry, Hannah, Kirsten, Baba, Nick, Amy, Eli, Jacob, Lauren, Henry, Felix, Hudson, Dakota and Gavin.  That’s a lot of names, and she was doing animal sounds before that!

The church service was nice.  It was very low-key with just acoustic acoustic guitars and piano for instruments for the worship songs, most of them being traditional Christmas songs.

There were no children’s services, so Milly sat with us.  They had some crayons and pages for coloring to keep kids entertained, but Milly just wanted to empty and reload the crayons repeatedly.  She was mostly good, if a little squirmy, until the end when she was getting really fidgety.  She did well overall though.

After that was finished we stopped by the house to let the dogs out for a bit then grabbed some presents and headed to Beulaville to celebrate Christmas was Amanda’s side of the family.  On the way there I talked to my nephew, Jackson, whose birthday was yesterday.  I asked if he got my present, but his parents had forgotten to give it to him.  When he did get it (a Wolverine action figure), he told me he loved it then, before getting off the phone, asked if I’d get him a really cool present next year, too.  That was really sweet of him.  He also asked if I’d come over tonight so I could be there for Christmas.  I told him I wish I could see him, but I wouldn’t be able to make it, though I’d see him tomorrow night.

Amanda, Milly and I were the first to arrive at Peggy and Earl’s.  Milly was tired, but we’d forgotten to bring our pack & play, so we’d called Amanda’s mom to see if she’d bring hers.  She did, but they didn’t get there until about half an hour later.  Milly was already tired, as I said, but she got poked in the face or eye with a present and that set her off pretty good.  We put her down and she protested violently, but only for a couple minutes.

Lemonses, Dotseys, Mercers and Frazelles, we all ate breakfast dinner.  Amanda and Kirsten got Milly up towards the end of dinner and she ate a little (mostly a cheese biscuit, I think) then we opened presents.

Actually, before we opened any presents, Milly wandered into the den and found her present from the Frazelles, which was a large, decorated cardboard box with windows, a blanket, books and a pillow.  Just like Anna said her girls had done when they were little, Milly took right to it, sitting in it and looking out the windows at Hannah and then Kirsten.  Even after we opened other presents and Milly got her large stuffed chair, which she also enjoyed sitting in, Milly kept going back to sit in the box.

Amanda and I got tickets to a Seinfeld event with Anna and Barry with Hannah and Kirsten babysitting Milly for that night from the Frazelles.  I got some Sanuks (canvas-topped shoes that are billed as flip flops, which I now think might be just a tad large though I tried them on in the store) from Peggy and Earl, along with a shirt, undies and socks from Express.  They also gave us all their traditional gift.  We gave everybody Milly calendars, a tradition that has now been passed on to us from the Frazelles.

One gift that I thought was particularly special was one Phil gave to Amanda and Michael, which was a book, The Family, about the orphanage he grew up in.  He wrote one of the chapters of it and had it signed by the author.

We left around 8:30 with Milly getting tired.  She kissed and/or hugged everyone goodbye before we left.  We’d put her in a red onesie, but I think she was cold when I put her in the car because her legs were a little drawn up to her body, so I tucked a couple blankets in around her.  She looked like she was going to pass out when we left Beulaville, but she was awake for the whole ride home.  She randomly shouted “yay!” a couple of times during the trip.

Back home, we put Milly down to prepare for Santa’s arrival.  Amanda packed a few things and tidied up while I pulled pictures and videos off of cameras and phones to make sure there’d be plenty of space for more pictures this weekend.