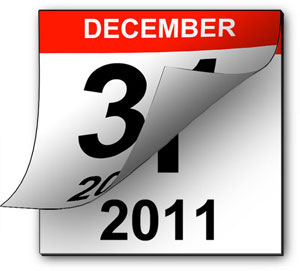 Milly has grown so much this past year.  She’s gone from just being able to turn herself over to walking, and walking pretty well as I noticed yesterday.  In fact, just this evening she was sort of running.  She would be on one end of the hallway then shout, “Go!” and run to the other end.

That’s another thing; that girl can talk, and not just talk, but really talk!  Of course, given the genetic disorder that is a propensity for verbosity that runs in the females in her family, this is no real surprise, but it’s amazing to think that in one year she’s gone from simply being able to laugh and gurgle to saying full (if simple) sentences like, “I love you, Daddy.”  Just awesome.

There have been some positive changes with Amanda as well.  I love my wife, and she has surprised me this year with her adaptability.

Professionally, I’ve helped grow the company I work for.  We’ve not only made the company more profitable, we’ve also expanded our services, our capabilities, our staff and our talent.

And then there’s basketball.  Watch the video below from about the 33 second mark of the game clock to see my favorite thing that happened in sports this year.

I’ll be totally honest with you, when Brian Zoubek gets ready to take his first free throw, I get misty.  My heart was pounding out of my chest when I was watching it live, and I’d be lying if I said it doesn’t still get going watching it again.

What I loved about this championship, and what I think will always make it my favorite one, is know what the three seniors went through in their careers at Duke.  Jon Scheyer, Lance Thomas and Brian Zoubek were at Duke during what was considered a down time.  Duke was bounced from the tourney in the first, second then third round their previous years.  People talked about the program being on the decline and Coach K having lost it.  Then, seemingly out of nowhere, this upstart Duke team (as upstart as a Duke team can be, anyway), with no real point guard and very little guard depth, comes along and wins the whole thing despite what just about every sports commentator in the country said was possible.  It’s just such a great story.

It was a very good year for Duke besides that though.  They went undefeated at home, were co-champions for the ACC regular season, and won the ACC tournament and every other tournament they played in.  Coach K won FIBA gold coaching Team USA with a bunch of younger NBA guys and Duke became a place a lot high school recruits want to go again.

Duke has since gone undefeated this season and is looking pretty good, even without freshman phenom Kyrie Irving, who was injured in a rematch with Butler.

All this happened while Carolina, the hated rival down the road, was experiencing a pretty historic down year.  They lost a bunch of games, including a 32 point loss to Duke for both teams’ last game of the regular season, barely managed an NIT bid and have had a rocky start to this season behind a disappointed showing by over-hyped freshman, Harrison Barnes.

There were a lot of other things that went on in 2010; lots of friends had kids, the finale of Lost, the advent of 3DTV (which I would rather not have take off, at least not in the current form where you need glasses to watch), nearly every other movie coming out in 3D, Inception, The Social Network, the world was introduced to Antoine Dodson.  Most of that wasn’t bad.