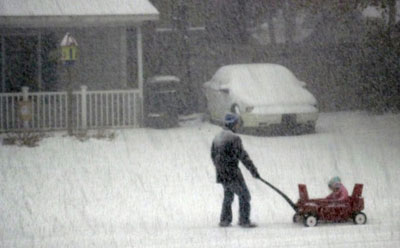 I woke up early this morning so I figured I’d get a head start on work.  It being a Monday, I was working at the kitchen table and, after Amanda left, I remember looking outside and suddenly, as if out of nowhere, snow had covered most of the ground.

The first thing I did once I got Milly up was to show her the snow outside one of her nursery windows.  The only thing she did for a while after that was to point outside and say, “Snow.”  After she ate I bundled her up in several layers and took her out in it.  She wouldn’t let me put any shoes on her for some reason, and she wouldn’t let me put plastic bags over her feet either, so I didn’t let her walk in the snow.

I did pull her in her wagon though, which she always enjoys.  Unfortunately, the show was still coming down very hard and fast, as you can sort of see in the picture above, taken by Deanna across the street.  We had only gone down to the first street over, only one lot over from our house, and back.  You can see how much snow had accumulated on me in just that time.  Milly wasn’t enjoying it by that point, especially since with the wind coming at her face on the way back.  I went back out after she went down for a nap and measured between three and five inches in the backyard.

Work wasn’t too busy, which is probably because a lot of our clients are here in Wilmington and the town was mostly shut down.  The exception was that there was a website we had to take down (not our fault), and it’s a very popular one, so I got a crapload of calls asking about it.  I wasn’t really at liberty to disclose anything about the situation, but the phone’s constant ringing got annoying.  At least they have a lot of loyal followers.

Amanda didn’t come home until the early afternoon.  There wasn’t really a decision made about what to do for her work, and there hasn’t been any decision yet for tomorrow, so I guess she’ll get up and go.  It’s supposed to rain tomorrow afternoon.  The roads weren’t very good today, and they probably won’t be very good once it melts some and freezes back over again tomorrow.

Oddly, there was no snow until this evening in the Triangle area.  Usually they get snow a lot earlier and worse than we do here.  I heard Charlotte got a good bit though.

Later in the afternoon, Amanda, Milly and I went out in the snow while it wasn’t pouring down on us.  Again, Milly wouldn’t let us put any shoes on her, so we carted her around in the wagon.  We only went about as far as we did the first time, but we did take a blanket to keep Milly bundled up in this time, plus I moved her from one side of the wagon to the other to keep the wind off her face.  I was a little disappointed that, since she wouldn’t put shoes on, we didn’t get to actually play in the snow.  I thought it would have been fun to build a snowman.

Nick Warkentien called this evening and said something about playing MarioKart on the Wii with him, Amy and Greg Mason.  I had the idea of us all getting on Skype while we played so we could communicate.  I found out that Amanda and I are woefully out of MarioKart shape.

After we embarrassed ourselves in some Kart, Amanda challenged me at Dominion.  We played a random deck and I kicked her butt.  I’d like to be nicer about it, but it’s true.

Going to bed, Amanda noticed that the heat strips were on upstairs and it wasn’t even cold, so I went out to hit the reset button on the upstairs air conditioning unit.  I noticed it was already humming like it was running, but it wasn’t doing anything.  I realized it was frozen and kicked it a good few times, which got it going again.  A few minutes later I heard it making a really loud knocking noise, so I went out and kicked it a bunch more.  A few minutes later it was starting to do it again, so I took a light and a hammer with me and busted a bunch of ice off of it.  I think it was fine the last time though, because near as I could tell pieces of ice were just breaking off and falling into the fan, causing loud noises.