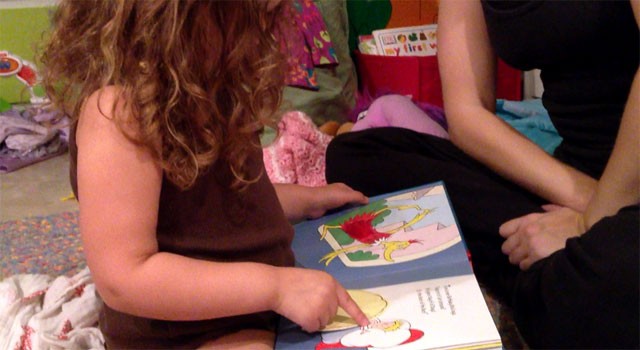 Not a whole lot to talk about for my day.  Milly went to the Arboretum with Karen.  It was nice out and I decided to take a walk to the store and saw them on the way back.  Milly seemed pretty tickled to have me in the van with her.  She and Nana played for a few more minutes when we all got back then Milly took a nap and Karen took off, but not before giving me a little something for my and Amanda’s anniversary, which is tomorrow.

I heard Milly knocking on her door right before Amanda got home.  I kept working for a bit as I’ve got someone who wants to go live with a website tomorrow.  I left the computer after a bit but kept texting help for getting it going while I was playing with Milly.  Milly told me to put my phone down, and that’s the point I decided to quit working for the night.

Amanda, Milly and I played for about an hour before her bedtime.  She and I were playing with her Matryoshka owls in her room at first, then Amanda came in and started talking for one of Milly’s little plastic lizards, which Milly started belly laughing at.  I started playing with Carle.  Then Milly and I got in her cardboard house while Amanda hid in different places around the room.

After Milly had brushed her teeth with Mommy and Daddy toothpaste we read her current favorite book, Happy Birthday Baby, which is an interactive and abridged version of Happy Birthday to You.  At any rate, I read it to her then she read it three or four times, and by reading it I mean of course that she said the parts of each page that she remembered.  And that was adorable, of course.

I did spent a lot of time getting that website live tonight.  I’ve set up several that are very similar to it, and yet for some reason I kept running into one-of-a-kind problems with it.  It was extremely frustrating at times, but I guess that added to my sense of accomplishment once I looked it over and everything seemed to be running fine.  I set the DNS and it should be live in the morning.  Well, when I wake up.

You know something that surprises me?  How easy it is to find movies online that haven’t been released yet.  I read that there was a leaked version of the Avengers movie that’s coming out later this week.  Out of curiosity I did a Google search and found a working copy of it right away.  It was obviously a bootleg, and I want to see it in full HD glory, but I did see that it was working and appeared to be the real thing.  Crazy.