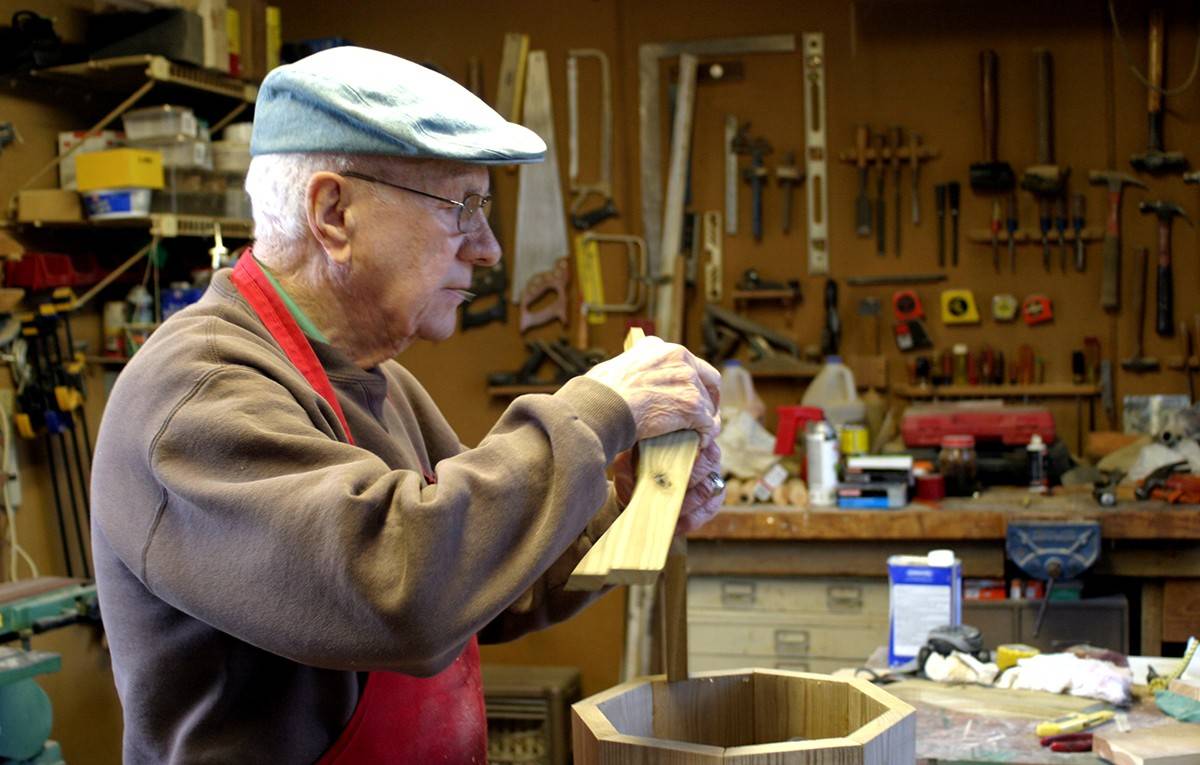 Earl Lemons was truly one of the best people I have ever known. Everyone talks about how he loved helping people and how wonderful his cheese biscuits were, and about his woodworking projects (particularly birdhouses, mirrors, and piggy banks), all of which is true, but what meant the most to me is how he treated me when we would talk.

I had left his oldest granddaughter, after all, so I didn’t really feel like I deserved any particular special treatment from him or Peggy. I had no contact with them for some time, but I sent them a letter once. Peggy wrote me back, and at some point I called them. After that I would call them now and then just to chat and see how they were doing, and unless they were otherwise engaged, they always seemed very happy to hear from me. Earl in particular would spend a lot of time catching up with me, telling me what was going on, asking about things in my life, and reminiscing, often telling me about when he lived in Wilmington and would pass the street I currently live on on his way to work.

Not to make this about me, but Earl was a special kind of person, and the kindness he showed me was but one example of what made him special. He could have completely written me off, but he treated me with a kindness I probably didn’t deserve, and that will forever mean something to me.

I remember when Amanda called me to tell me that her grandfather had passed. It was my sister Andra’s birthday weekend, a Sunday, and most of the family was at my parents’ new house for the weekend. I could tell something was up, so I went out to the front of the house and she told me that Earl had missed an appointment so her mom called a neighbor to check on him and, well…

His wife, Peggy, had recently injured herself and was in rehab in Wilmington, an hour away from their home. She wanted to be able to get around on her own before having a service for him, and that finally took place today.

Amanda had told me she had found out on Friday (which was Andra’s birthday), but hadn’t wanted to burden Milly with the news for the weekend. It was difficult for me to not say anything to Milly on our ride home, but Amanda, understandably, wanted to talk to Milly about it herself.

I did tell my dad, who had always really liked Earl, so he wanted me to keep him apprised of everything. He and my mom came down to Wilmington this morning then we all went to Beulaville for the service.

The church was packed, which is a testament to how well loved Earl was. Earl had been cremated so there was no viewing, but the family was lined up at the front of the church to receive people, with Peggy in the middle, the first generation and spouses in age order to one side (the right if you’re facing them) with the next generation to the other side.

When we first got there Milly saw us in line and came to give us hugs. She chatted with us for a minute and told us she hadn’t wanted to stand up front, which, as the only great-grandchild, I’m sure she’d been given the opportunity to do. Knowing her, she probably just didn’t want to be up there accepting condolences from people she didn’t know. Milly sat with Mike, Amanda’s boyfriend, and his daughter, who were in the family section.

I was doing fine until we got close to the front. Amanda’s aunt, Anna, was the first person in the receiving line. When we got towards the front of the line I turned to my parents and said, “I’m gonna need a tissue.”

I think I told Anna I was fine until I got to her. I was having a hard time not sobbing, so I don’t remember if I said anything to Barry, Phil, or Karen, but I got hugs from all of them and Karen, Amanda’s mom, made sure to tell me that Earl had loved me.

Peggy was next in line. She was sitting and I knelt down to talk to her for a minute. That, of course, was the hardest part. She gave me a hug and also told me, choking up a little, that Earl loved me. I told her I loved him and her and tried to get out that I still felt like they were my own grandparents. She gave me another hug and I gave her a kiss on the cheek.

Amanda was next in line. I had told my mom while we were towards the back of the receiving line that I wasn’t sure what to do when I got to Amanda. I don’t think things have been particularly bad between us for a while, but we’re not hanging out and inviting each other to cookouts, you know what I mean? Mom suggested if she didn’t reach out for a hug to shake her hand or touch her elbow, something along those lines.

I honestly can’t remember if I actually said anything to her. I think I gave a half smile and a little shrug. That may not be accurate, but that’s how I picture it looking back. All I remember for sure is her just looking at me. I think I took her hand for a second to give it kind of a shake and moved on. It felt rather awkward. Mom and Dad gave her hugs.

I got hugs from everyone else: Amanda’s brother Michael and his wife Jenn, cousins Hannah and Kirsten. I remember telling Christian, Hannah’s husband, “Long time no see.”

I looked for a pew that wasn’t too far back or too populated and ended up sitting next to Stephanie Johnson and Amy Warkentien, two people I haven’t seen in quite a while. I didn’t realize they were at the end of that row when I headed down it- I was just looking for space for me and my parents.  We chatted a little bit, mostly talking about kids.

Anna and Karen both gave eulogies. Both were funny and both were touching, but I couldn’t help but note the difference in style and delivery between the two of them.

We joined the procession to the cemetery after that. I wasn’t sure, since he’d been cremated, what exactly was going to happen. It was set up just like any other burial, but they had a container of Earl’s ashes instead of the coffin. Since he was buried with military honors, the two servicemen with the flag held it up instead of draping it on the coffin. The wind blew it and puffed it up, which was a nice effect.

There had been one extra seat at the end of the row Milly and Amanda were on, so Amanda had motioned to Amy for her to grab the seat. When all was said and done, the pastor went down the line and gave hugs and condolences to everyone, Amy included, which made me laugh. I think Amy laughed at it after it happened too.

We had parked behind the Pickens(es?), who are Phil’s (Amanda’s dad’s) sister’s family. I had gone on some trips with the sons. I chatted with them on the way to the site and on the way back, particularly with Stanton. He’s only a few days older than I am and he was always really fun to hang out with. I had sent him a text a long time back and a note of condolence after his brother, William, died just over a year ago, but I never heard back so I assumed he just didn’t care to have any contact, which I could understand, but we talked and caught up a bit. Peter and Ona chatted with me as well.

William and I had actually texted a bit now and then. I had written a letter to Peter and Ona after I heard of his death. They wrote me a very nice letter back, but Peter thanked me again for having sent the letter.

I also talked to Karen’s cousin-in-law, Dain, and his son, Tripp. They greeted me warmly and Dain put his arm around me as kind of a walking hug as we were heading to the site.

Before we left I talked a little bit to Hannah, Kirsten, Michael and Jenn. I mentioned how much gray Michael was getting in his hair and he pointed it back out to me. I reminded him that I was over 40 now.

Phil had come over and talked me me and my parents, although he was aiming for Ona and Peter. (Not that he acted like he didn’t want to talk to any of us or anything- he was very friendly.)

I found Milly before everyone left and gave her a big hug and talked to her for a minute. Karen thanked me again for coming it, as did a few other people. I told them I wouldn’t have missed it.

A few people asked if we were coming back to the house for some food, but we hadn’t been invited, not that I take any offense to that. I mean, it would have been nice to have more of a chance to talk to some of the people I didn’t get to talk to, particularly Anna and Barry and Joanne (Peggy’s sister), but it’s not like it was something I was expecting, and I wouldn’t want anything to be awkward for anyone.

I’m glad I got to see Earl off. During the service I would look at his portrait and think in my head, “Hey, Earl,” and I could hear is voice talking back to me.

I am glad my parents came. It made things easier for me to have them there.

Peggy and Anna had both told me that Earl wanted me there, and there was an undertone of them having told Amanda that he wanted me there, but I don’t think she’d have been offended if I told her I would really like to have gone had that not been the case. The only thing she had asked me was to not bring… I don’t think she ever quite phrased it out loud, but I assured her Tristen wouldn’t be there and I wasn’t going to be bringing any babies.

Anyway, I would have wanted to be there one way or another, but I’m grateful that Earl had expressed to Peggy that he wanted me to be there. It made it so nobody had to have any awkward conversations, but it also meant that I meant something to him, and to mean something to a man like him means a lot to me.