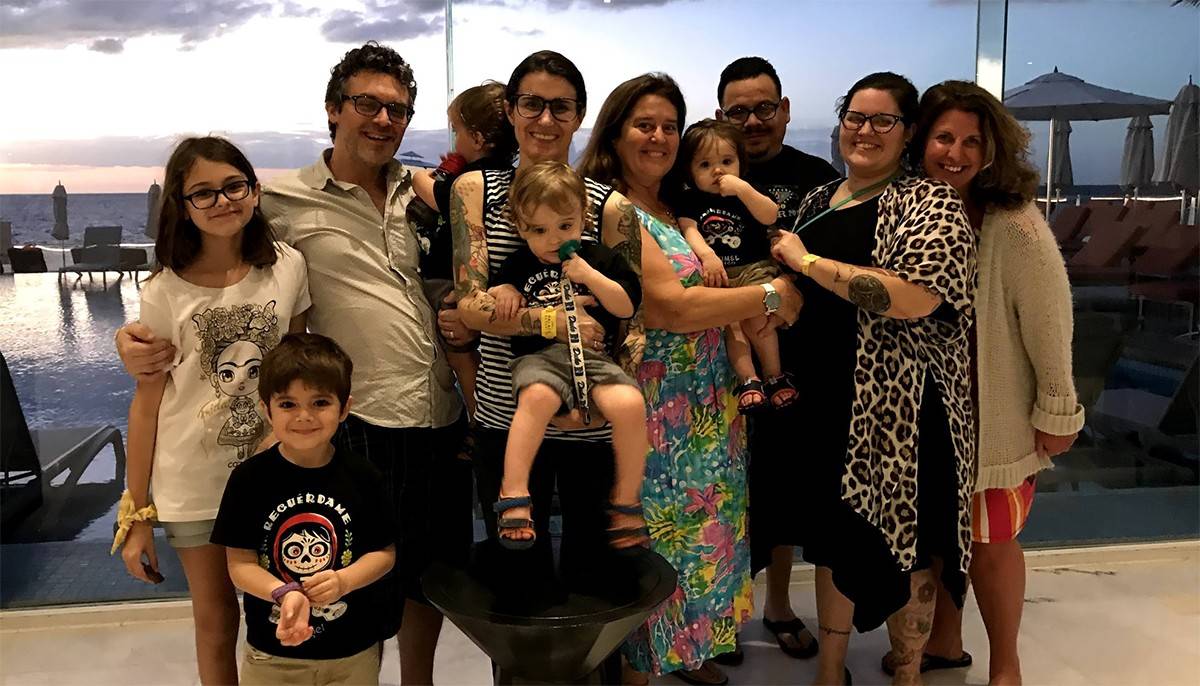 The Time We Did Go to Cozumel

Disclaimer up front: I’m writing this nearly a month after we got back from the trip. It was hard to to find time while on the trip to document our goings-on, and I’ve just been busy since we got back. I figured I couldn’t not write about it though. I mean, it was a pretty big trip.

I am going to try to sun it all up pretty quick though.

Okay, so as you may recall, our plane was delayed the day we were supposed to leave. Delayed enough that there was no way we’d be able to make it on the Saturday we were supposed to leave. I think the only option was a route that would end up taking 12 hours or so for us to get there after layovers and all, and that just wasn’t gonna fly (pun intended) with all the small kids we had on the trip.

So we treated our first attempt as a practice run. The kids did sleep better this time, but Tristen and I both forgot to set alarms and only woke up when Torrie called us. We had to scramble, but we made it to the airport, which is really close to us, and to the gate just fine.

From there we flew to Dallas-Forth Worth instead of Miami, which was obviously a little bit longer. Plus we had a several hour layover there. We found a spot to charge our devices that had some foamy stuff the kids could play on. Laura spirited Tristen away and the rest of us wandered the airport until we decided to eat at a… Ruby Tuesday maybe? Some place like that.

From there it was on to Cozumel. All the kids did well on both flights. Milly ended up with Torrie on the first leg of the trip. Tristen and I were lucky enough to have Fawkes and Phoenix in the first row, so there was a bit more leg room for us to mess with tablets and such.

We arrived, went through customs, and got a taxi to the Palace. It took a bit for everything to get sorted out at the resort since they were nice enough to push our entire trip back a day, start and finish. Laura’s friend Julie had arrived the night before and greeted us all when we got there.

And this is where I summarize huge chunks of the trip.

The littles loved the pool. There’s a sandy area off to the side that they enjoyed playing in too. There’s a shower area near the place you get in and out of the ocean that Fawkes and Phoenix thought was hilarious.

Tristen and Milly went snorkeling the first day. Milly and I went a time or two after that. On one of our last days there she and I went kayaking. She wanted to do the standup paddle board, but she’s not quite tall enough.

We all went into town a few times. Once it was just me and Milly and we just went looking around at murals and shops and stuff. There’s one store that’s kind of like a Wal-Mart that I wanted to show her. It’s kind of unique because there are a bunch of small shops on the first floor, then you take a small escalator up to the main store, where they sell your usual big box store stuff, but they also have motorcycles and scooters. I also thought it was interesting that they sell drinks in three liter bottles instead of two.

We also all went shopping one day near the cruise ship port. I enjoy that because you get to see a bit more of the town. We had lots of people asking about our gamelitos.

The food was amazing as always. One really great thing about being at an all-inclusive resort is not having to worry about what to feed the babies. We go through so much food with them, and it can be a hassle to try to give them variety.

I say that, and yet they had the same dinner most of the time, which involved chicken fingers and quesadillas.

Dinner was actually a bit stressful when we ate in the restaurants (as opposed to the outdoor buffet). The kids’ food would come well before the adults’ food, so they would be done and bored by the time our food got there. Tristen or I left to take them upstairs to the room before we could even finish our dinner a couple times, but then we decided to take the tablets and let that distract them. Yeah, yeah, bad parenting and all, but we wanted to enjoy our dinners.

My stomach was hurting the night we went to the Italian restaurant. I hadn’t eaten particularly well that day and had a number of alcoholic drinks, so it wasn’t a sickness or anything… just poor choices.

A note on the alcohol. I might have felt a little buzzed once, but that was it. I’m pretty sure they water the drinks down a bit. Which is fine, because I mostly drank tasty drinks and that way I got to have more of them.

Anyway, the first Duke-UNC game of the year was one night, so I volunteered to put the boys to bed myself that night. It started while we were still at dinner and I kept tabs of the score on my phone. I was very consternated that Duke was very much struggling against a historically bad UNC team. The game went into overtime when Tre Jones purposely missed a second free throw, got the rebound, and made the bucket. There was another miracle play at the end of overtime to give Duke the win. It was a heartbreaker for a Tar Heel team looking for something redeemable in a very down year. You can watch it here if you like. Personally, I’d skip the first 35 minutes or so of game time.

The evening entertainment was fun as always. The first night we were there they had a Super Bowl party. We didn’t really get to participate in that because it was going on as we were settling in and it was already really crowded. Tristen and I watched a bit of it inside. We actually stopped watching when it looked like the 49ers had put it away, but the Chiefs had a big late comeback.

There was a Mexican music and dance show that I saw part of, a water show, the fire show. Tristen and I didn’t get to see them together much as one of us was usually up in the room with the boys. We couldn’t get a baby camera to connect to the wifi (or the Echo Dot we took mainly to be a sound machine), but after a few days we found an app we could download to turn one phone into a camera and the other a monitor, so that freed things up for us a lot.

All the kids except Gabriel (that would be Milly, Sebastian, Fawkes, and Phoenix) got to go to the kids room most days. One thing that disappointed us a bit was that kids under four, I think, had to have a parent or someone there with them, so we couldn’t just drop them there and go off and do our own thing for a bit like we had thought. We were in there enough that I feel like we got to know Abby, the employee who was in the room most of the time, a bit.

I also talked a good bit to Rodrigo, who was on the entertainment staff. He said hi a few times in passing when he saw me with the twins and said he was a twin too. I talked to him enough that I kind of wish I had asked if he was on Facebook or anything so I could keep up with him. He was very friendly and I enjoyed chatting with him.

Milly and Julie got along really well. It was nice that she was able to help keep Milly entertained, as we couldn’t really leave all the babies unattended by the pool, which is where we spent a lot of our time.

I did have to keep pestering Milly about doing her schoolwork though. And after we got back I found out about an assignment that was due that her teacher hadn’t mentioned to me. Milly kept forgetting to bring it home to work on it, which irked her mother. Well, it irked her that she didn’t do it in the time Milly was with me the week after we got back. I won’t go into that.

The day we left was the day before the twins’ birthday, so they threw a little party for us that afternoon. Abby stopped by, as did a few other staff members who became fans of our family.

We had another layover in Dallas on the way back, though it wasn’t nearly as long. The final leg of the trip was easily the worst part of the trip. Fawkes and Phoenix had taken their usual morning nap, but they didn’t have a later one and didn’t fall asleep on any of the plane rides. Around 11:00 at night, they, particularly Fawkes, started to lose it. There was no consoling him and he was twisting and writhing and screaming… it was not good.

I got some sympathetic looks and consolation from the lady in front of Tristen, and the flight attendant was really nice as well. I mainly felt bad for the people in front of me. We were all the way at the back of the plane though, so at least that mitigated the scene that was being caused.

It was a tough trip at times, which I knew it would be since we had two almost-two-year-olds with us. I mean, even the last time we went and took Milly, she was relatively self-sufficient. Definitely not as much one-on-one time for me and Tristen, but we were able to get some time now and then. It was a really great experience though, and while I’m sure Fawkes and Phoenix won’t remember much of it, I hope they have at least inklings of memories of it.

I never could get them to speak any Spanish though.