Down, Down Down, PLOP!

Down, Down Down, PLOP! 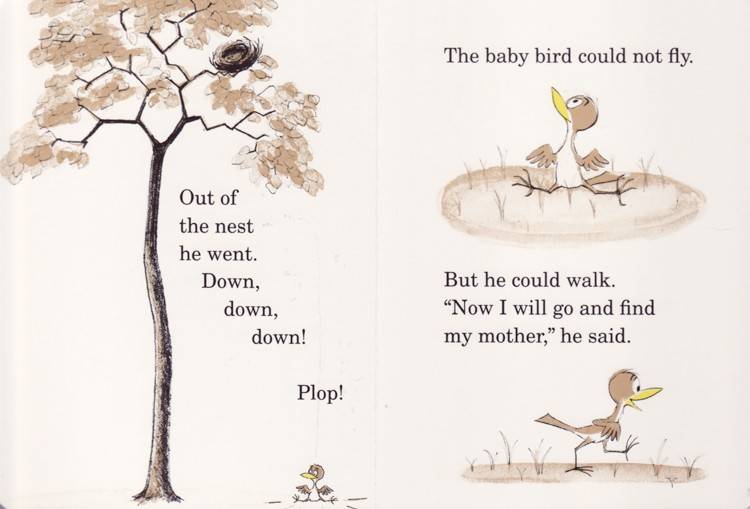 It’s been a while since I’ve done a more random update, but I felt I should do it.

The title of this entry is a line from the children’s book Are You My Mother?. In that part, a baby bird falls out of his nest and goes

When Tristen or I read it, we would hold a finger up high and kind of circle it down then hit the bed with the palm of the hand. Fawkes and Phoenix always liked that part and would say it and mimmic our move. Griffin started doing that tonight. Rudimentally, sure, but you can definitely tell that’s what he’s doing.

He hasn’t been much of a talker. He started walking earlier than the rest of my brood and he definitely got “Uh oh” down early on and he’s been saying “Bye” (sounding like an attitudinal southerner: “Bah!”) but he’s starting to say more. I think some of his “Ma” sounds are the beginning of Mom or Mama. I think he tries to sing too.

He’s a dancer as well. He’s got the bounce move all babies have, but he also likes to throw in a stomp every now and then. He’s probably the best dancer of all the babies, although Phoenix has his own signature move now where he waves his hands and sways a bit.

Speaking of Phoenix, he’s doing a really good job of saying words you ask him to say. He enjoys this one alphabet book we’ve got, and he’ll repeat all the letters and do the sounds.

Fawkes tends to say more on his own, and he’s got this way of babble-speaking. It sounds like a lot of “Digga-digga-digga,” but he’ll vary it up a bit. It’s hilarious to watch him do it, and I think he know, in his own mind at least, what he’s saying or trying to express.

What else is up in their little worlds?

We recently moved bedtime forward a little, which actually is working well. The only issue we’ve been having with sleep is that ever since we went to visit my parents about a month ago, Fawkes will get up pretty much every single evening prior to falling asleep and go lay down by the door and call out to me or Tristen. We ignore it until he starts pushing on the door, which makes a louder sound than you’d expect. Noise carries down the hallway I guess, because when he calls for us it sounds like he’s right outside the living room.

Fawkes and Phoenix get some tablet time while Fin Fin is in bed, but we limit them to educational games, even though they sometimes find their way to video apps. One of them found Amazon Music yesterday and had it playing in the background. They’re getting pretty good with the games though. Most of them involve lining up shapes, numbers, and letters. The one with letters then has you match words to places in sentences. They caught on really quick. I suppose we’ll need to get one for Griffin too at some point.

The twins have gotten to where they like to climb on people’s backs. We were supporting them before, but I’ve gotten to where I carry them around until they start to slip off to try to get them to work on that arm strength a bit.

They enjoy some tussling. Fawkes and Sebastian in particular play a little rough sometimes, but they both seem to like it.

Phoenix had some bug bites on his face and will point to his face almost every night after the lights go off and say “Bug bite” to try to get some medicine put on his face.

I’m sure there’s plenty more I could say about what the babies are up to. That’s why I really need to get better about doing this.

Milly’s summer is in full swing, although I worry it’ll be one she won’t have super fond memories of, mainly because between the increase in COVID-19 cases in the state (and the country, really) she’s a bit limited on being able to play with friends and going places.

No theater camp or art camp this summer.

We’re trying to keep her on somewhat of a routine with things to do to teach her more responsibility so she doesn’t just sit and draw or play games all day, but also to help prepare her for, ya know, life. She has to take a shower, fix food for herself, clean a room, read some, spend some time with her brothers, and learn something every day. The topics vary. So far she’s covered topics as varied as the effect of sugar on the body (she hated that one) to the Wilmington race riot of 1898.

Milly got an iPad and an Apple Pen for her birthday and she spends a lot of time drawing on that. I’ve got to say that her art has been improving by leaps and bounds over the last few months. She watches videos for tips and on top of the iPad also has a lot of nice sketchbooks, pencils, and markers.

I still read to Milly, which I enjoy doing because I know it won’t go on forever. We finished The Wind in the Willows a couple nights ago and started on The Wonderful Wizard of Oz tonight.

That’s what’s going on with my kids lately.

Tristen’s settled in to her new work schedule, which has her off two days with a half day as well. The long days are tough on me with work, especially days like today when I had a lot of people calling me for various things. It’s not as bad on days where I just need to do things because I can do things around nap times and tablet times and from the time Tristen gets home in the afternoon until whenever I’m ready to pass out at my desk. I just feel bad not taking calls, especially when they pile up.

Business is going really well though. I’ve actually increased business despite the massive nationwide unemployment and economic downturn, so that’s good. My sister, Erin, has been working for me for several months now, and that’s been a huge help just in handling and even expanding the company workload. In particular she’s been really good at handling a lot of work from one of my larger clients that would always keep me busy, and I talked to another client today from whom we should be able to get a decently steady stream of work. Win-win-win.