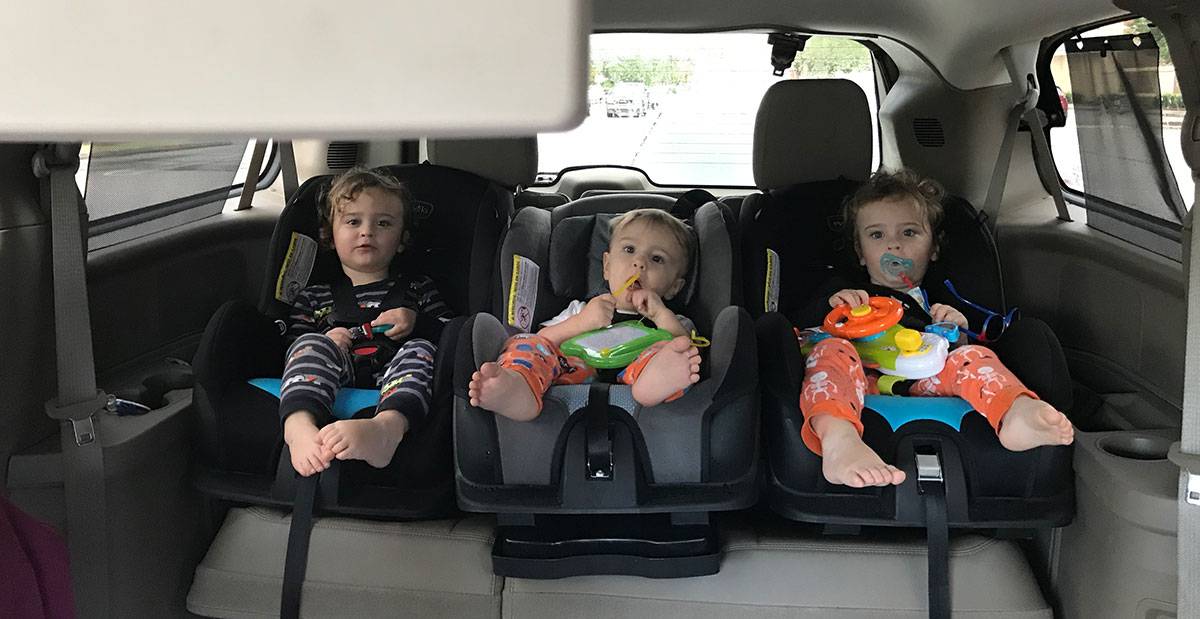 One of the boys was up at about 5:30, 5:45 this morning, fussing at the door. I think it was Fawkes. Well, I want to say it was Fawkes because this happens more with him, but something’s telling me it was Phoenix. I can’t say for sure. Tristen can though. She woke up before I did and got up to check on him once he started banging the door.

It was about a paci. It always is. Both Fawkes and Phoenix just have to have two of them and when they wake up and can’t find one, or either, they get all bent out of shape about it. They fuss, then they go to the door, then they push on it, and because there’s a tiny bit of space where the door isn’t totally flush against the jamb, pushing makes a really loud sound.

Anyway, Tristen got a paci for whomever it was, then couldn’t find a second one. The ensuing protest woke up the other twin plus Griffin. Griffin cried for a while, but they all settled down, if they didn’t quite fall asleep, until their Hatch went off and I went to get them.

The morning was pretty standard, although in an attempt to start moving their nap times closer together, I put Griffin down a little before 11 (traditionally 10) and the twins at noon (which had been between 12:30 and 1). Aside from Griffin waking up because I couldn’t immediately find Phoenix a second paci (notice a problematic trend there?), it went alright. I did leave Griffin in there for a bit to see if he’d settle down, but, not surprisingly, he did not. Not for more than a few minutes at a time anyway.

Tristen got home a bit early and I started working, but before I could get very far we got hammered with a pretty raucous thunderstorm that took the power out. I got an alert that it was expected to be restored by 6:30. I was pretty miffed at this, as my day is already pretty full tomorrow and not having power kinda cuts into my ability to do what I do.

We had a plumber come by, the father of someone Tristen works with. The hot water line under our kitchen sink had been leaking and I had it turned off. The faucet was also dripping. He fixed the leak, which was caused by an old and cheap bit of plastic, and told us the manufacturer might give us the parts we need to replace the drip.

So we decided to run some errands. Packed the kids in the van, put Wall-E on and went to pick up a prescription I’ve been out of for a couple days.

Then we discovered that the pharmacy’s power was out too.

All good, we’ll see if we can hit it up later. We’re out of milk and diapers, so let’s go to Costco.

Then we discovered that Costco’s power was out too.

With nothing else to do, we sat in the van and waited to see if they’d open up, but Tristen noted that it looked like employees were leaving.

So on the off chance that it was open, we drove past Target on the way back home.

Then we discovered that Target had power! So Tristen went in and got a few things while I talked to my sister, Erin, and the boys kept watching Wall-E.

Bonus: Tristen was talking to her sister, Torrie, when she got out of the van, and Torrie, who lives in our neighborhood, told her the power was back on. Or at least I figured Torrie told her that, as she mentioned it as she was getting out, and I don’t think she gets the text alerts like I do.

Griffin started saying “water” today or yesterday. He says it just like his brothers do though: “baba.” It’s odd that they say it like that because they used to say “awa” which sounds very similar to “agua.” (That’s Spanish for “water,” if you didn’t know.) Anyway, he very clearly says that.

He also got hold of an extension cord this afternoon, looped it over his shoulder, purposely tangled a shoe in it, and just walked around the playroom and dining room like that was a thing.

And he was very intently watching some Baby Einstein videos today. His little brain appears to be soaking up so much right now.

It would be nice if he’d stop biting though. He got Fawkes on the arm really good this evening.

I talked to my other sister, Andra a little bit this evening. She said Milly and Addy seem to be having a really good time, although there was one time where Milly was watching Jackson play a video game, which Addy wasn’t into. She also said that she walked around the yard checking out flowers and such with Milly and was impressed with how many she knew. Oh, and she said she loves that Milly asks to give her a hug every morning. My sweet girl.

I received an Orbi satellite to add to my mesh wifi system today. (Got a great deal on it: It was on sale plus I got a bit off for singing up for their newsletter.) I didn’t really get a chance to set it up until this evening, but it works great. Previously you could kinda get a signal sitting on our back steps, and Tristen said she could sometimes get it in a further part of the yard near our bedroom. I walked around the yard checking the signal and we’re now getting full signal at every corner of the backyard.

I was about to check how far it went into our side yard and walked back towards the gate when I looked up and saw someone leaning against our gate in the dark!

I started to back up and then thought maybe it wasn’t a person, but there was definitely something of some mass on the gate. It was already totally dark out, so I couldn’t make it out, but the thought crossed my mind that it was a large bird, like a hawk.

I fumbled for the light on my phone and that’s when I discovered… it was out cat, Magic.

I was seriously alarmed for a minute there though. Heart in my throat sort of thing.