Today was mostly uneventful, although since we finally hooked up the cable in the office, it was the first day since we’ve been in this house (with the possible exception of our very first weekday in this house) that I had the tv on at all while working. It was the news, and I mostly had it on in the background. I ended up turning it off at some point.

I like how things are going with work. I had a quick chat with Tim Henrich, the guy who took over a chunk of what I used to do, to make sure things were working out okay for him, and they were. I think the only things I would like to have in the short term to make my job even a little better would be a Blackberry and a wireless headset. I used to be anti-wireless headset on account of the fact that people wearing them look full of themselves, but I’ve been using the wired one that came with my work phone more and more lately, and the wire does tend to get in the way. 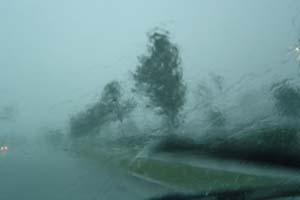 So I went to pick up the Buffalo Wild Wings tonight. On the way there I noticed a buttload of lightning. We heard on the news yesterday that the Triangle area was getting a lot of it, so I guess we were seeing remnants of that. The lightning wasn’t so bad, and in fact I enjoy watching it, but by the time I got to the intersection of College and Market I could barely see anything and gusts of wind were dropping rain on the car like a solid wall of water. There was even a little hail. I called Amanda right before it started raining and she said the temperature had dropped sgnificantly from the time she got into the car at work and a few minutes after. The weather was actually pretty horrific; you could see the trees bending and everything. Effin’ insane weather is how it was described in my head.

When I got to Buffalo Wild Wings the register wasn’t working right and they eventually just let me take the food, since I didn’t have any cash and there was no telling when the register would start working again. I intend to pay them back next week anyway, but it was a real nice gesture.

The rain wasn’t as bad on the way back, and by the time I was about to turn off onto my exit there was no rain at all. I think we only got a sprinlking at the house, and we only live a couple miles from where the Buffalo Wild Wings is.

Amanda and I ate then I went to play some Civ IV before heading back down to watch tv with her and Renee Sikes, our house guest. We flipped around a bit then settled on Mr. and Mrs. Smith. It was about what I expected. I think it would have been better if it didn’t have the Hollywood ending I knew it would.