I woke up this morning and went on out to mow the lawn.  I was going to go ahead and seed the yard, but we were meeting my brother, Adam Dotsey, to see X-Men Origins: Wolverine at 11:20 and Amanda wanted to stop by Pier One first to look at shelves and carpets and such. 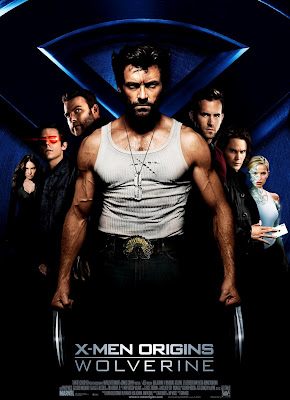 Wolverine was okay.  There was lots of good action and all, but with a little more character development it could have been a lot better.  It also could have been two different movies- one with him in a unit of super powered mutants and another of his life after that.  Oh well.  It accomplished its goal of being a summer action flick, but I think the population in general has come to expect more of comic book movies.

After the movie Amanda went shopping and Adam and I went to Wrightsville Beach.  Lars and Kaitlyn Boscaljon were there along with Lars’ brother, Sven (Peter).  The two of them were just about to go back out surfing when Adam and I came up to join them.

I think Adam surfed about a year ago with me once.  He did pretty good today.  The waves weren’t supposed to be very good so it wasn’t crowded, but there were some fun little sets that came in.  Adam stood up on at least one and surfed the whole way in kneeling down on one.

He also gave me probably the best surfing compliment I’ve gotten to date.  There was one wave we both tried to go on.  I caught it and he didn’t.  He told me as I was paddling back out from it that it pissed him off to see me catch the wave with such seemingly little effort.  I told him that’s what it’s like for me to watch Barry, Hannah or her friends.

While we were out there Lars mentioned that we were doing something today that Michael could never do, which is to surf with our brothers.  I had thought that earlier.  Well, I hadn’t thought about Princess not having a brother to surf with (afterall, I am his brother-in-law and we do hang out a fair amount), but about how Lars and I were both hanging out with our brothers and getting them to surf, which made me think of calling it Brothers Day.

I think Adam had fun and I hope he decides to come out more often to surf.  He’s been working out lately, both in his apartment complex’s gym and at Planet Fitness with a friend.

Amanda came to pick me up after I called her when we finished and we went home for a bit then out to the Port City Java where Michael works to meet up with their cousin, Stanton Pickens.  Michael was working, but the rest of us went to eat at The George.  I like hanging out with Stanton, and not because he generally buys dinners at nice places to eat.  We sat outside and talked and ate and talked for a while even after we’d finished eating, then we walked back towards the car (which was also near the hotel Stanton was staying at) and sat in front of the Hilton for a while (which wasn’t where Stanton was staying, but was where we were parting ways) and talked some more.