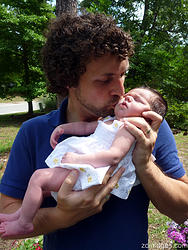 As I write this I’m sitting in bed at the end of my first father’s day with my two best girls: my wife, Amanda and my daughter, Milly.

We got to bed about 10:00 last night.  Amanda and I held hands and said a prayer, thanking God for the gift of our daughter and asking his blessing on her.  We also asked for guidance as parents and patience for the tough nights.

We got up at 6:00 and got ready for church, making it early to the 8:30 service.  Milly isn’t big enough to go to Grow Zone- you’ve got to be six weeks for that, but she did great with us.  She slept through the loud music and didn’t fuss at all until a little at the very end during the final prayer.

We talked to a couple who sat behind us with their baby daughter.  It was his first Father’s Day too.

We did proudly show her off to as many people as we could.  Nick Warkentien saw her, but of course he’d already met Mills.  We also saw Lisa Stikeleather, the Nowaks (who saw Milly in the hospital too), Dave Sapp (who is heading to Portland for culinary school soon), Mike and Kirsten Paschal (she gets the Most Excited prize), Tall Guy and his wife, Mike Ashcraft and Wayne Harris.  We also stopped by Grow Zone to get some squeals from the ladies there.  We looked for Mark Loudermilk, but we couldn’t find him.

I missed a call from my dad and forgot that my calls were forwarding to Scott, so my dad got to talk to my boss today and wished him a happy Father’s Day.  When I called my dad back I told him this was like our shared birthday, where we were each wishing each other the same thing (happy birthday/happy Father’s Day).  He was in Lexington, so I asked if it was odd to be at his dad’s house on Father’s Day since Pap had just died so recently.  He said it wasn’t and everyone was doing just fine.

Amanda and I went to Target after church to get some frames and cards for Milly’s grandfathers and great-grandfather.  After that we went by Lowe’s Food and I saw Erin in there.  She was getting herself something to eat, but she also picked up a Father’s Day card for me.  In fact, Adam and Andra later called to wish me a happy first Father’s Day, and I thought it was nice of all of them to call.

When we got home we took a few Father’s Day pictures and Erin took off back to Raleigh a little while later.  Michael and Amanda’s parents showed up after a bit, followed by her grandparents and eventually the Frazelle clan.  We cooked out some chicken and had a bunch to eat.  Hannah finally got to meet Milly and we took some pictures of the four generations of Hawkins/Lemons/Mercer/Dotsey girls.

I got a few gifts, which was nice.  Amanda gave me my Father’s Day gift a week ago today at 1:10 in the morning, but Peggy and Earl gave me a card and a check and Karen and Phil got an umbrella for our table out back.

The house was really hot when everyone left.

It was a good first Father’s Day.  I talked to a lot of my family and got to spend some good time with people I love.  Milly was good today, on her week old birthday.  She’s a strong girl.  She can hold her head up and she’s doing circles in her crib.

Amanda’s been emotional lately, which is to be expected.  It’s been frustration, but it’s been happiness too.  Tonight it’s the latter.