Duke is Going to the Final Four!

Duke is Going to the Final Four! 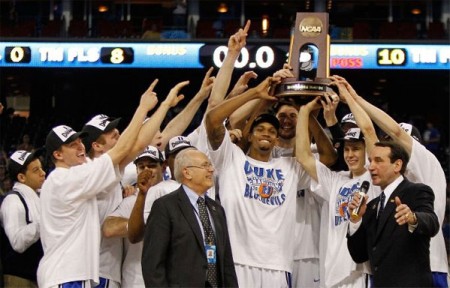 WOOO HOOO!  Duke is back in the Final Four, baby, and all is right!

Amanda, Milly and I went over to Seth and Dana’s to watch Duke take on Baylor with them, Randal Kennedy and a guy named Jason.  It was a tough game, just like I expected.  Nolan Smith had a career high while Kyle Singler also set a record: he didn’t make a single bucket in the game (though he did score off of free throws).  Jon Scheyer also had a good game, Brian Zoubek and Lance Thomas contributed and Andre Dawkins knocked down two key threes in the first half.  It was a close one with several ties and lead changes, but Duke was able to pull away after a few big possessions towards the end and will advance to the Final Four following their Elite Eight 78-71 victory over Baylor.

As up and down as the game was, we got pretty excited.  Milly, who hadn’t napped this morning and was up for the game during her usual evening nap time and doesn’t like loud noises anyway, was very fussy towards the end, particularly when we got excited about a play.  Poor thing.  Seth and Randal kept apologizing, but I could definitely understand.  I was holding her and it was hard to keep it in.

The reason Milly didn’t get her morning nap, which seems to be her most important one, was because we helped out with Grow Zone this weekend.  She did fine for the 9:00 service, which is the one Amanda and I actually attended, but when she had to go back in for the second service, the one where we were helping out, she wasn’t so happy.

Volunteering at Grow Zone is going to switch from every other week to doing it every single week, and Amanda and I were thinking about trying it out, but honestly it’s so tough on Milly that I think we decided after today that it’s probably not the best idea for us right now.  It’s a shame, too, because I enjoy watching the kids and hanging out with the other volunteers.

Speaking of watching the kids, in my room today was had eight boys and four girls.  It got a little crazy, as it tends to do when the boys significantly outnumber the girls.

After we got home we fed Milly, ate lunch and watched some TV.  Once we cleared a couple shows off the DVR we watched Michigan State beat Tennessee to advance to the Final Four.  That game stayed close pretty much from start to finish.  Then after that we picked up some Burger King and made it over to the Hollomans’ just in time for the Duke-Baylor tipoff.

I tell you, opposing fanbases are really hating on Duke right now.  People are talking about Duke-biased officiating, but they’re not taking into consideration the fact that two Duke starters picked up two fouls each early in the game and they have turned a blind eye to some really bad calls that went uncalled in Baylor’s favor, including Kyle Singler getting fouled while in the air and it being called a non-shooting foul.  What?!  The foul discrepancy was also pretty narrow (Duke’s 15 to Baylor’s 21), especially considering the fact that Baylor was fouling at the end to stop the clock.

Whatever, it was a good, tough, close game and Duke is going to the 2010 NCAA Tournament Final Four, and I couldn’t be happier about it.  Next up, West Virginia.  That could be a tough game too, but honestly I was more nervous about Baylor.  Obviously anything could happen, but I like Duke against any of the three remaining teams- Michigan State, Butler and West Virginia.  Two more wins, Blue Devils, and Mike Krzyzewski and Duke University get to bring home a fourth National Championship!