So Far So Good Tonight

So Far So Good Tonight

At midnight the Milly Monster reared its adorable snotty head again.  I was just about to go to bed when I heard her making noises upstairs, but they weren’t loud, whiny noises.  It was almost like she was talking to herself.  Amanda decided to give it a “wait and see” and gave her until 12:30 to quiet down.  12:30 came and went and Milly got louder, shifting into full cry mode.  Amanda decided she’d try to see if she could make Milly happy, which, of course, didn’t happen.  We gave it a go then, after trying unsuccessfully to put her back down, decided to take refuge in the guest room again.

Milly was a bit better today.  She was still very snotty and got fussy here and there, but overall I think she was feeling better.  Matt Davis of Lifestage Films was supposed to come shoot a video of Milly this morning, but I got in touch with him last night and told him I thought we should push it back, and I’m glad we did.  Amanda and I (and Milly by extension) overslept a little today, so not only would she have been snotty and all, but we would have all been in our jammies still by the time Matt got here.  We’re aiming now for Wednesday afternoon.

I had fun with Amanda today.  She was making a sandwich and, well, I can’t remember exactly what happened.  I was working in the kitchen and I think the mayonnaise jar popped a little or she dropped it on the counter while opening it, something like that, and I think she made a noise.  Like I said, I was working, so I wasn’t paying much attention.  She might have even said something about it.  I did say though, “That’s what you get for using mayonnaise, I guess.”  Just an off-hand comment.  She said, “What?”  She may have not actually heard me, so I repeated myself.  Then she said, “What?” again, so I repeated myself again.  This went on and on until I got up and started tickling her and picked her up.  I think I won that, but it’s entirely possible that she continued to mouth or whisper, “What?”

Well, I was entertained by the whole thing, so I put on Twitter (and by extension, Facebook):

Amanda saw that and posted “What?” on my Facebook wall.  When I noticed it I posted back, “That’s what you get for using mayonnaise, I guess.”  She varied up her “What?” after a bit, but it went on and on for a while.

Then it spilled over to Nick Warkentien’s wall. 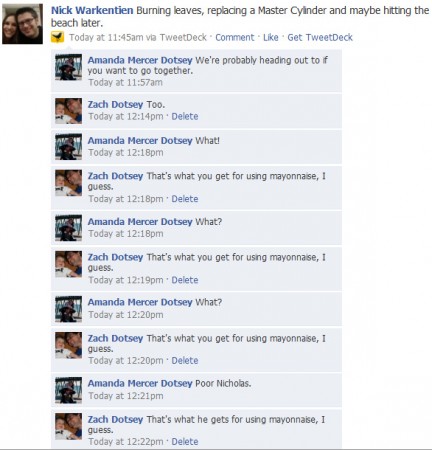 Amanda took Milly to get a dress for her baby dedication service while I worked.  She got a nice dress, but I was wanting her to have something a little more formal, so the one they picked up today will be used for the Easter service at church tomorrow.

While I wasn’t 100% caught up, I did get a lot done today and stopped work an hour early to go to the beach.  Nick and Amy were meeting us out there and we were all going to just hang out a bit, but there was a wave out and I haven’t surfed for a while.  Barry and I suited up, waxed down our boards and headed out into the cold water.

Actually, as cold as the water was, we were both a little warm in our 4-3 suits with gloves and booties.  It was a lot of fun though.  The waves weren’t huge, but you’d get some decent sized ones now and then and they were easy to get out on- a great refresher for someone who hasn’t been out in a long time.  I caught several and had a really good time.

Amanda and Milly hung out with the Warkentiens onshore.  I was planning on getting out of the water in time to watch the babies play, but I missed them.  Amy said that Milly and Eli had their first fight.  There was something, I think a candy box, that she had that both of them wanted to play with.  Eli ended up throwing it at Milly or something.  As only children, they need to learn to share.

When I got back to the Frazelle house Milly was napping.  We took off after she woke up and I fed her in the car then we put her to bed once we got home.  It’s almost 12:30 now and, cross my fingers, there hasn’t been any sound yet.  Hopefully it will stay that way.

After Milly went to bed Amanda and I watched Fringe from this week.  It was a great episode, telling about how Walter first opened a door to the alternate dimension and Peter’s back story.  They even had a retro, 80’s style beginning for the show.

I’m going to see the Arctic Monkeys on Tuesday.  Barry, Hannah and Kirsten are going and Christian was going to go, but it turns out he won’t be able to make it so they asked if I wanted to go.  I’m looking forward to it.

PrevPreviousNIT Runner-Up
NextDuke and Butler in the NCAA Championship GameNext