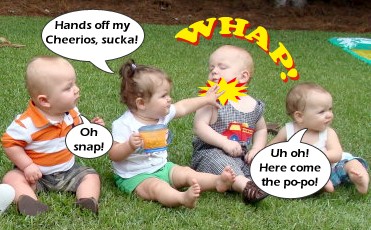 The whole family packed up and went five minutes down the road to the Millards’ today to celebrate Maggie Millard’s first birthday.  There were swings and slides and several small pools for all the kids.  As you can see, Milly interacted well with the other children.

Joking, of course, but really she did just fine.  We had a fun time seeing a bunch of friends and lots of babies, and Milly really enjoyed having a giant cupcake.

In order to accommodate the 11:00 party, we shifted Milly’s schedule a little.  She woke up at 8:00 as usual (actually she woke me up at 8:00 when I heard her making some noise) but she was back to sleep soon after she finished eating.  For one, she was a little fussy, but more importantly we wanted to make sure she got plenty of sleep since she’d be at a party an hour and a half earlier than she usually gets up from her nap.

Oh, I mowed first thing this morning, by the way.  I always listen to my iPhone when I mow, but today the left ear bud wasn’t working so I tossed it out.  I thought that might possibly happen because the last couple times I wound up the headphones in the back of my iPhone case the front of the ear bud came off when I pulled the headphones back off.  I’ve had that thing for a number of years now, so I guess it was time.  I got the headphones from Amanda’s iPod, which hadn’t even been opened yet (the headphones, not the iPod) and used those.  The down side is that there’s no built-in answering/pause button or microphone on it, but it does have a volume control.

Anyway, after we got back from the party we put Milly to bed and did our daily P90X workout, which was arms and shoulders today.  It wasn’t all that bad, really, though I’d like to get myself some weights for it.  We’ve only got one set of five-pound weights and some stretchable bands.  Amanda used the weights and I used the band, which did fine, but I think I’d be more comfortable with the weights.

There is, for the record, no place on my body that is not sore with the exception of my forearms, calves, hands and feet.  And face, I guess.

We got Milly up at 4:00 and headed over to the Frazelles’ for dinner.  Barry and I went surfing first, though as sore as I still was (and am), I didn’t know if I’d be able to take my board out.  Fortunately the waves were of a decent size and I took out Terry (one of Barry’s boards), which is much smaller and lighter than my own board.  It took me a while to get out because the waves were coming pretty consistently, and I never really caught a good one.  I would like to blame all of that on the fact that my body was so tired, but surfing (and paddling) uses such different muscles that the soreness had absolutely no affect on it.  No, I’m just out of surfing shape is all, and Terry’s a harder board to catch waves on for someone who is used to bigger boards.  Still, I’m glad I went out.

Barry and I went in after about 45 minutes.  Anna made some really great burgers and tots with her chocolate chocolate cake for dessert.  Two of those three items are not in the P90X diet, and one is in only sparingly.  Barry said that since I’d surfed it was all okay though.

We hung out there for a bit and let Milly play a little after her last feeding of the night.  Hannah was there because her flight to Guatemala was postponed due to a volcanic eruption near Guatemala City, which is where they were supposed to land.  It was funny to see Kirsten and Hannah help Amanda put Milly’s pajamas on because Kirsten is now such a pro at taking care of her and Hannah hasn’t really had to deal with changing her that much, if at all, really.  I think she might have once before.  Anyway, it just amused me that the younger sister knew more about changing a baby’s clothes than her older sibling.

Milly’s gotten really good at signing “please”, which is to run your open hand in a circle on your chest.  She’s still not totally comfortable with “more” and will usually sign “please” for “more” now, which is understandable since both are used in similar situations.  It’s so ridiculously freakin’ cute though.

After we got home and put the Millster to bed Amanda watched on episode of Friday Night Lights before going to bed herself.  Her stomach was bothering her.  Anna had said that hers was too, and her guess was that it was the tater tots.

Actor Dennis Hopper died today, falling in his battle to prostate cancer.  It really is odd how celebrities seem to die in bunches.