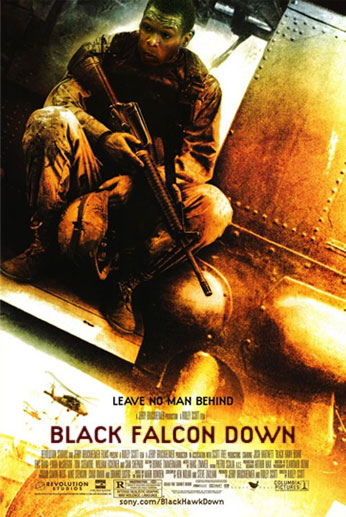 This requires a little explaining.  On the Duke message board I go to, Harrison Barnes is often called The Black Falcon.  I don’t know if he actually gave himself that nickname, but he has a necklace with that on it.  Deriding him for his oh-fer performance (which I mentioned yesterday), someone made a play on the movie Black Hawk Down by saying Black Falcon Down.  Inspired by that, I put Barnes’ head on the poster for Black Hawk Down.  I wouldn’t bother sharing it, but I was really proud of the Photoshop job I did with it, particularly matching the coloring on the face to the original.

After eating breakfast with my girls, the first thing I did was go upstairs and sand the new wall.  I’ve had trouble finding a good time to do it because it’s noisy and right next to her room, so I can’t do it when Milly is asleep, and it gets spackle dust all over everything, so I can’t do it while she’s awake and I’ve got her all by myself.  That means I have had to do it when Amanda is around and Milly is awake, which is usually when I’m working.  Of course, I suppose I could have done it some evening.  Anyway, it got done today.  Next step: primer.

While I was doing that, Amanda and Milly were playing downstairs.  Milly had a pot and a large stirring spoon.  She’d swirl it around in the pot and then hold the spoon up for Amanda to “eat” from it, then take some for herself.  She’s got an imagination!  After I finished my work and showered, I watched her and she shared some for my while Amanda took her shower.

Milly didn’t get much of a morning nap.  She was up until about 10:15 (maybe a little later) and while she didn’t fuss, she also didn’t go to sleep right away when I put her down.  She was up around noon to get ready to go to the mall to eat with Amanda’s grandparents.  We were meeting up with them so Amanda could help them with some Christmas shopping.

After we ate we went to look for some Sanuks.  It turns out that there’s a flip flop store at Independence Mall now, and since I heard Amanda say they’d gotten some for me for Christmas, I’m about 100% sure I’m getting a pair.  I kinda figured I was anyway.  Of course, since my mother-in-law reads this site regularly, I wouldn’t be surprised if she said something to her parents about it and had them not initially give them to me.  I’m onto you, Karen.

After we looked at the shoes, Milly and I took off.  Before we left though, Earl decided to buy Milly a pass on the carousel, so I took her on it.  This one has two levels and straps to help hold kids on, so we went to the top level and instead of riding with her this time, I let Milly hold on by herself.  She slid a little to one side or the other now and then, but I kept her straight.  She held on really well on her own anyway though.  When it was done she signed for more.

Milly and I went to the playground at Hugh MacRae Park for a while.  We mostly did the swings, but she also got on a play set with some other kids and went down a couple slides.

We stopped at Costco on the way home to pick up some dog food, but we took the long route to get there so we could partake of some of the samples.  Milly had a cornbread muffin and some Craisens.  We also got our first look at 3D telelvision while there.  I roll my eyes at it, since you have to wear glasses to see the 3D effect and that last big step in TVs is just now getting pretty affordable, but I’ll admit that it did look cool.  Milly was more interested in playing with the glasses than looking at the TV with them on though.

We got home and Milly was able to nap for maybe an hour before I got her up, dressed her up nicely and headed over to the Frazelles’ for Barry’s birthday party.  On the way over she was looking at one of her little books as though she was actually reading it.  She also clapped for songs like Obladi Oblada and Cake’s I Will Survive.

Aside from Michael and Jenn, Milly and I were the last to arrive; all the Frazelles, Christian, Amanda, Peggy and Earl were already there.  Milly was a little introverted at first, but I chalked that up to her not getting to nap much today.  She snapped out of it soon enough though and was interacting happily with everyone while Barry helped me track down the video cable for the Xbox he’d given me a couple weeks ago.  He also gave me the DVD controller for it along with some games that he hadn’t gotten rid of yet.  He offered to give me a nice steering wheel set, but I don’t play many racing games and Michael had gotten there by then.  He does play driving games, so I suggested he take it.

Christian happened to have some Rio Bravo CDs in his car.  He’d given one to Michael and Amanda and I mentioned that we were planning on buying one, so he ran and got us one.  I offered to pay him, but he just gave it to us.  We really do like their music, and it’s not just because we know them.  I really dig Micah Kolk’s vocals.

Dinner was lasagna, bread and salad followed by Anna’s famous chocolate cake.  As always, the company and conversation was entertaining.  We didn’t end up leaving until about 8:30.  It was well past Milly’s bedtime, but, fueled by chocolate cake and ice cream, she didn’t seem to mind.

Milly went to bed right when we got home.  I’ve gotten to where I’ve added an Eskimo kiss to the nightly ritual and that always makes her laugh.  I’m always tempted to do it a lot to hear her laugh more, but I leave it at one laugh so as to not get her all riled up.

Amanda and I watched Fringe then Amanda went to bed.  I set the Xbox up, but I couldn’t save any games because Barry’s Xbox was one that didn’t have the hard drive and mine is with my own Xbox, which is being looked at by Travis.  I messed around a bit with it anyway though, just because I was kind of excited to be able to play with it again.  (TWSS.)

I am really ready for my cough to go away.  I feel fine otherwise.