I had a meeting with Scott and Travis after church this morning at Atlanta Bread.  Anna and Barry, whom we had just seen before leaving church, ended up there as well, though I was off sitting with Scott and Travis discussing work (and playing with an iPad), so I didn’t get to hang out with them.  I did see that Barry had gotten Milly something with chocolate though, which was no surprise.

The meeting was good.  We discussed a number of things about moving forward, suggestions for improvement, that sort of thing.

When I got home I got to forgo my nap in favor of putting up Christmas decorations.  To be honest, I love having Christmas decorations up, but I hate setting them up and taking them down.  On the other hand, seeing all the lights strung up at church had me wanting to get decorated as well. 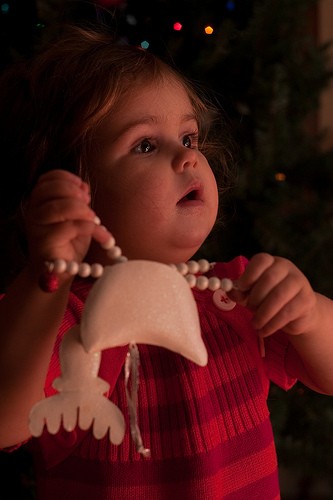 Milly was napping when I got home and we had just about everything set up by the time she was up.  She was really enamored of the Christmas tree with all the lights on it.  We only have a few ornaments on the tree this year, and most of them are pretty high up so Milly won’t be tempted to mess with them or accidentally break any.

We had three strands of colored lights for the tree.  Of the three, one was completely kaput and the other two were only about two-thirds functional, so Amanda went out to get some more lights.  It took her a while because a stop light had fallen (I think at MLK and Kerr?) and traffic was redirected in a way that she had to pretty much go all the way downtown in order to circle back to get to Target.  Anyway, she ended up with some LED lights.  They’re really cool in that they project circles of colored light on the floor and the wall from the tree.

Milly was bipolar this afternoon/evening.  She’d be just fine and happy then terribly cranky.  That’s always fun, you know.

After she took her bath (which she said she didn’t want when we asked her, though she had no problem taking it) and went to bed Amanda and I watched Fringe.