Coach K: Third Winningest Coach (But Not for Long)

Coach K: Third Winningest Coach (But Not for Long)

Coach K has now won more games in his career than all but two other coaches: Dean Smith and Bob Knight.  One of those will definitely be passed this season.  He passed Adolph Rupp with tonight’s 877th win, only needs three more to pass Dean Smith and only needs 26 more to to pass his mentor.  There are 22 games left in the regular season with a possibility of adding six in the post-season (which would, of course, require another championship).  Good times!

The team Duke beat tonight was the Bradley Braves.  It wasn’t expected to be much of a contest, and at 83-48, it wasn’t.  There were some things of note though.  Kyrie Irving is out “indefinitely” with an injured toe.  Nobody seems to know if that means a couple weeks (which is okay because Duke’s schedule isn’t too tough in the next little stretch) or if that means much longer than weeks.  To that end, the Blue Devils were playing a different offense tonight, and it showed in the slow first half.  Duke only scored 32 of their 83 points in the first half. 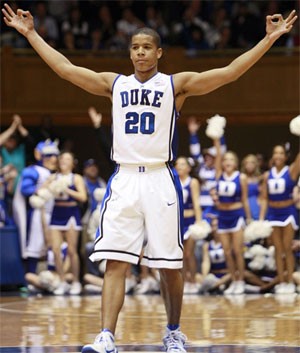 The big news of the game was Andre Dawkins.  I’ve really liked Andre Dawkins since he announced he’d be forgoing his senior year of high school to come to Duke early last year to help with guard depth.  The kid wins most improved so far.  He’s better on defense and can score inside and out, plus he’d dished out some nice assists.  He had a career night tonight with 28 points while hitting eight threes!  Miles Plumlee also had a nice night, scoring 14 points on seven of seven shooting with no turnovers.

On a less shiny note, Nolan Smith went 0-8, scoring only two points on free throws, but he did have ten assists to two turnovers while filling in the point guard role for Kyrie Irving.

I almost went to this game.  My buddy Seth Holloman called me up and said he had two extra free tickets to the game.  It was short notice though, and at first I said yes then started calling around to try to find someone to go with me.  But then I thought about how I still had work to do and the fact that I was (and am) pretty tired and wouldn’t really want to make that drive tonight, so I changed my mind.

Amanda, Milly and I went out to meet Parker Ayars this afternoon stopping by Chick-Fil-A for lunch.  Milly sat in the booth without a booster seat or anything and seemed to enjoy that.  Before we left we told Milly we were about to go see the baby.  She started asking over and over, “Wheh deh beh-BEE?”  That’s, “Where’s the baby?”  The way she said it made it sound like she was speaking with an Italian accent though.  It was funny.

The whole Ayars crew was there at the hospital, of course.  Kim seemed (understandably) exhausted, but was doing well.  Peyton was a little shy, but as soon as we left we heard her talking through the door.  Milly had started to get a little fussy so I let her watch The Hot Dog Song on my iPhone.  Peyton was interested in it, but wouldn’t take the phone from me to look at it.  She did peer at it when Milly was holding it though.  Milly even held it out towards her some to share it.