Yesterday I said something about wanting to see how Duke responds to the St. John’s loss in their game against Maryland.  To be honest, I was a bit nervous about it.  They ended up doing pretty darn good, beating Maryland 80-62 and only trailed for 40 seconds of the game.

Tyler Thornton got his first start, which I was excited about.  When I went to the Countdown to Craziness this season I was really impressed with his on-court demeanor and how vocal he was.  He plays some scrappy defense and I thought he did a nice job tonight.  Sure, he made some mistakes, but I think it would be hard not to get some jitters when you’re getting your first start as a Duke freshman playing at the Comcast Center in front of the most hostile crowd your team is likely to face all season.

Thornton starting at point paid off in getting some early looks in the post, which lead to a pretty good game from Mason Plumlee, and it moved Nolan Smith off the ball, giving him a chance to play in a role he’s more used to.

There were a lot of fouls called against Duke early in the game, forcing Ryan Kelly and, more surprisingly, Nolan Smith and Kyle Singler, to sit out a bit.  The great thing is that even with them out, Duke was able to push their lead to 15 in the first half.  Maryland rallied and made it a seven point game to close the half, but it was still very encouraging to see what Duke could do without their two biggest (healthy) stars.

Overall, it was great to see Duke bounce back from their last game and smack a decent Maryland team in the mouth in their own house.  Next up, a struggling NC State then Carolina.

It was very nice out today.  Amanda and Milly went to the park with Stephanie and Jacob for a while.  I was inspired to take the laptop and work outside for a bit.  When they got back, Amanda had forgotten to pick up some milk and some ranch dressing at the store, so I put Milly in her wagon and we walked there.  I felt a little odd pulling Milly around a grocery store in a wagon, but more than anything it elicited smiles from people. 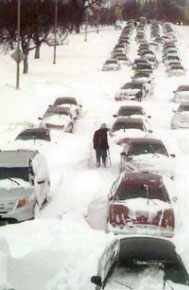 There was a huge snowstorm across the midwest last night.  In Chicago (and presumably other places as well) thousands of cars were abandoned on roads that became impossible to drive on.  I couldn’t help but think about how moving water slows and then freezes as a parallel.

I also mentioned yesterday that there were riots in Egypt.  While there was looting and police brutality and other bad stuff going on, apparently the violence ratcheted up some today.  Pro-government mobs took to the streets and clashed with anti-government mobs.  It was said that the pro-government people were bankrolled by Mubarak’s government.  I just hope that whatever comes out of all this gives people the freedom they want and that the government isn’t replaced with some fundamentalist regime.