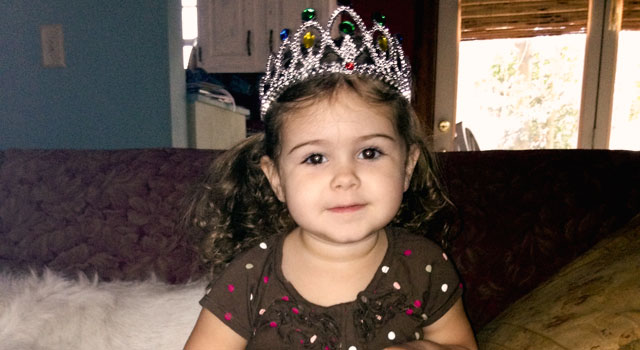 Milly was very friendly and playful today.  We were monsters: princess monster, tickle monster, happy monsters; we were princess and king, and Amanda, though absent, was queen; we were doggies: king dog and princess dog or baby princess dog.  Milly wanted to keep giving me tackles.  She also wanted to talk with Wolverine, which involved me holding a Pez dispenser and talking to her in a gruff voice.  She also had me give her two ponytails, which Amanda later turned into braids.

She sang a lot too this morning: ABCDEFG, The Bitsy Bitsy Spider, Row Row Row Your Boat, Twinkle Twinkle Little Star, I’m a Little Teapot.  She also started singing You’ve Got a Friend in Me, so I found a YouTube video of it for her to sing along too, then I found one with clips from 30 Disney songs (though one of them was from Anastasia, which the maker of the video acknowledged knowing it wasn’t a Disney movie).

Amanda came home with a pizza and left a little while after Milly got up.  They went to Brilliant Sky and Old Navy.  Milly spent some Valentine’s Day money on new shoes and finger crayons, which are crayons you put over your finger to draw with.  A few were broken, but I expect more than a few will be before too long.

I finished up another site today, so I’m done with current sites.  I did get what I thought was a pretty good lead though.  I should hear back from them in a few days.  I’ve also got a few people interested in some of my social networking services.

Had a chat with Scott today about how things are going.  We seem to be on similar paths or schedules lately.

Amanda’s grandparents stopped by this afternoon.  They stuck around for Amanda and Milly to get home, chatted for a while then headed off.  They were in town for some doctor appointments and such, but were kept busy all day so they didn’t do lunch like they usually do when they’re in town.

Amanda (and Milly) made teriyaki chicken, green beans and dirty rice for dinner.  Amanda and I ate our chicken with cheese and a pineapple on hamburger buns, but Milly did not.  She did eat well though.  She ate most of her rice (which she’s always liked), and pretty much all of her green beans and chicken.  It took some work to get her to try the pineapple though.  Overall we were really proud.

I cleaned up after we ate.

Once Milly went down (we read her Goodnight, Moon for the first time in a long while) Amanda and I watched The River.  It’s turning out to be a nice, creepy show.  I do hope they have a definite ending in mind though.  It’s well done, so I’d hate to see them add to it just because it’s successful.  (If it is.)