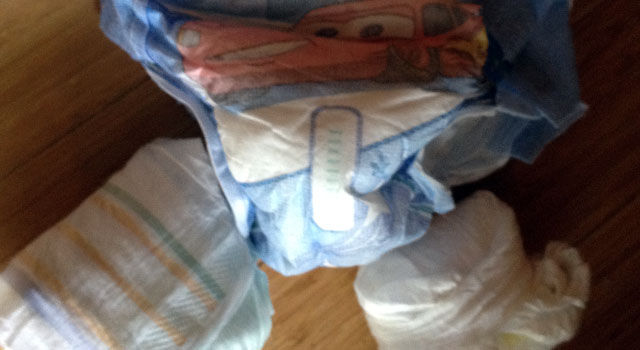 Amanda woke up a mother of three this morning, for all intents and purposes.  The dogs ran downstairs a little before 6:30, so to make sure they wouldn’t pee on anything I went on down to let them out.  As I was scooping their food I heard Ada crying, so I went to get her and started feeding her.  Amanda came downstairs and we heard Eli calling for his dad.  He wasn’t upset or anything, but we went ahead and got him up and gave him some cereal.  Amanda took a shower while I fed Ada then I took the kids upstairs and Milly was up soon after that.  The kids entertained themselves for a bit until after I took my shower and herded them all downstairs where I dressed each of them in turn and Amanda finished getting ready.

Overall it went pretty smoothly aside from getting up earlier than usual and Ada wanted to be held for a while after we first got upstairs.

On the way there Milly announced that we were going to church.  I asked her what she was going to do there, trying to get her to say something about going to Grow Zone, but her answer was, “Say ‘hi’ to Larry.”  I thought that was awesome.  Larry is a Grow Zone security guy who is always near the entrance.  He’s also a big Duke fan, so we chat briefly every week, and Milly has gotten to where she knows that when she walks in the first thing to do is to go up to Larry and give him a fist bump.  One week when he wasn’t there Milly looked puzzled and said, “Where’s Larry?”

After the 9:00 service at Port City Community Church we met Nick at his truck and gave him back Eli and Dad’s carseats then stopped by Dunkin’ Donuts to get a quick breakfast to eat in the car.  Went back home to let the dogs in and get a few things then headed out.  Amanda remembered that we needed gas so we went to Costco then went to Lowe’s because Amanda wanted to pick up some flowers for her mom and grandmother for Mother’s Day.  While she was coming back a strap broke on her shoe so we had to go back to the house once again.  Didn’t know if we’d ever end up leaving.

While Milly and I were in the car at Lowe’s I called my mom and grandma.  Left a message of Milly saying, “Happy Mother’s Day” for my mom after we couldn’t get her on the house, mobile or my dad’s mobile.  Called Baba and I told Milly she’s my grandmother.  Milly said, “Yeah, I love her.”  Then she said “Happy Mother’s Day” when Baba answered the phone. When Baba asked her, “How are you?” Milly didn’t answer at first so I said, “Milly, tell her how you are,: and Milly just repeated that.

Had lunch in Beulaville.  Michael and Jenn were a couple cars in front of us after we got off of 40.  Frazelles and Mercers were already there except Barry, whose uncle had just died.  I think he was with his dad, but he showed up not too much later.

We spent some time playing at what Milly calls Gigi’s Park.  At first she wouldn’t go up on the big metal slide, but later, when it was just me, Michael and Jenn, she did, though she just wanted to stand at the top for a while.  We kept asking if she wanted to slide down, so which she kept replaying, “No day-doo.”  (No thank you.)

I’ve mentioned going to see The Avengers to Amanda probably every day since its release, so at church she texted her mom and asked if she’d like Milly to stay there tonight and she could just bring her back tomorrow, since she comes down to Wilmington on Mondays anyway.  Karen was amenable, so when we left we left Milly too.  She didn’t really seem to care at all.  I don’t think she ever took a nap today, so she went down pretty well from what I hear.

We got back, fed the animals, made some pit stops, put the dogs back outside then rushed to Mayfaire.  It’s the last day of half-priced fraps and Amanda really wanted one.  We just made it.  Leaving the neighborhood we were stuck behind Bonnie, who was on the phone and we think unaware that we were behind her, then we were stuck behind two fire trucks that were not in a hurry.  I deftly maneuvered through the traffic and was pretty proud of our arrival time.

We bought tickets then walked around different shops to pass the time before going to see the movie, which literally had 20 minutes of previews.  We both really liked the movie.  I thought the action was terrific, particularly the geek-out scenes where Iron Man and Thor fought, and then later when Thor and the Hulk fought.  The highlight was probably Hulk’s fight with Loki though.  That probably got the best response in the theater.  And of course we stuck around for both scenes at the end.

Came home and gave Amanda a massage for Mother’s Day (on top of the earrings she said she liked yesterday that I bought a couple minutes after she left the shop- no big surprise to her).