My Thoughts on Buying a Van

My Thoughts on Buying a Van 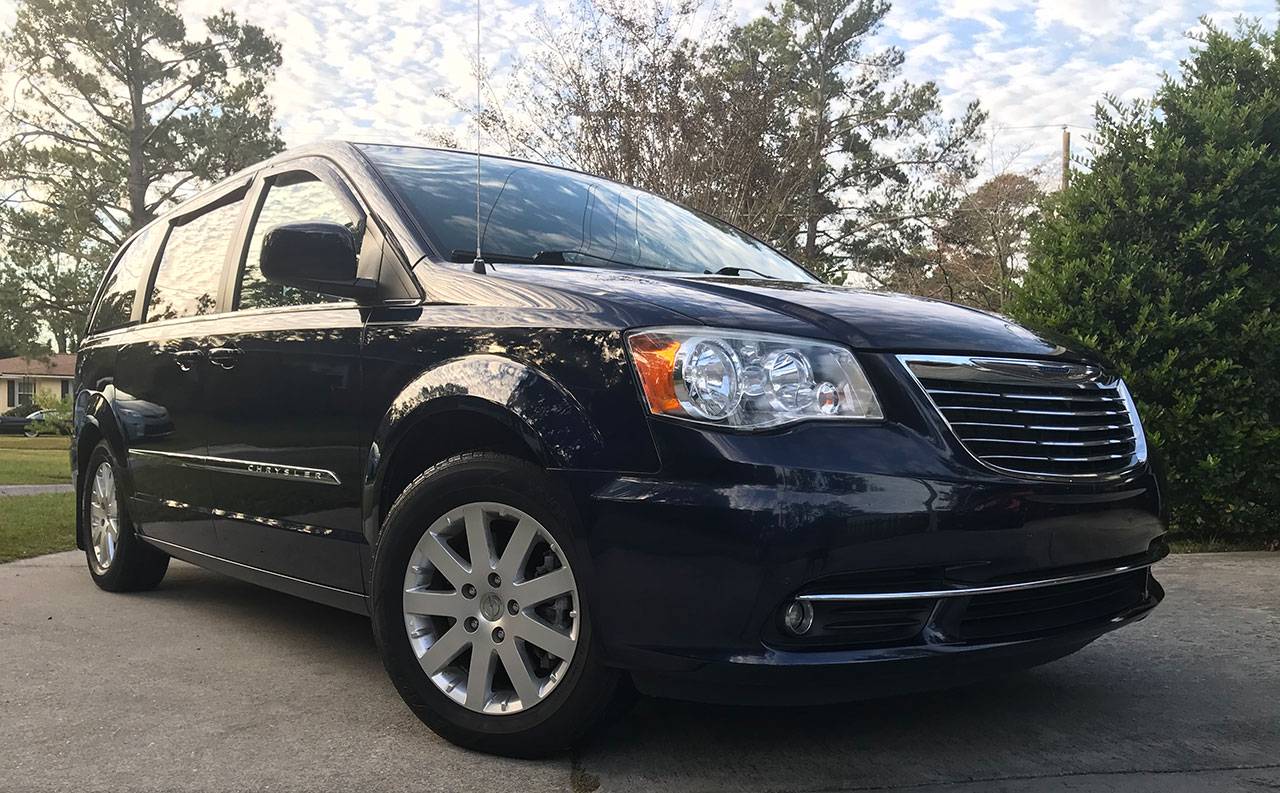 Well, we finally did it. But first, some background.

I had a Ford Escape several years ago. I enjoyed that car, but, being honest, my neglect did it in. I traded it in with some negative equity. That one was named the Steak, because once when I told Eli Warkentien that it was an Escape, he said, “Steak?” He was maybe three years old. It was cute and funny, so that became its name.

Once I overcooked the poor Steak I didn’t need anything fancy: Just something to get around town for meetings now and then and to pick Milly up from school a few days a week. I found an affordable little Ford Fiesta. It was silver, so I called it La Plata, which is silver in Spanish (because it’s a Fiesta, which we all know is Spanish for party). Sometimes I’d call it La Platita (Little Silver). 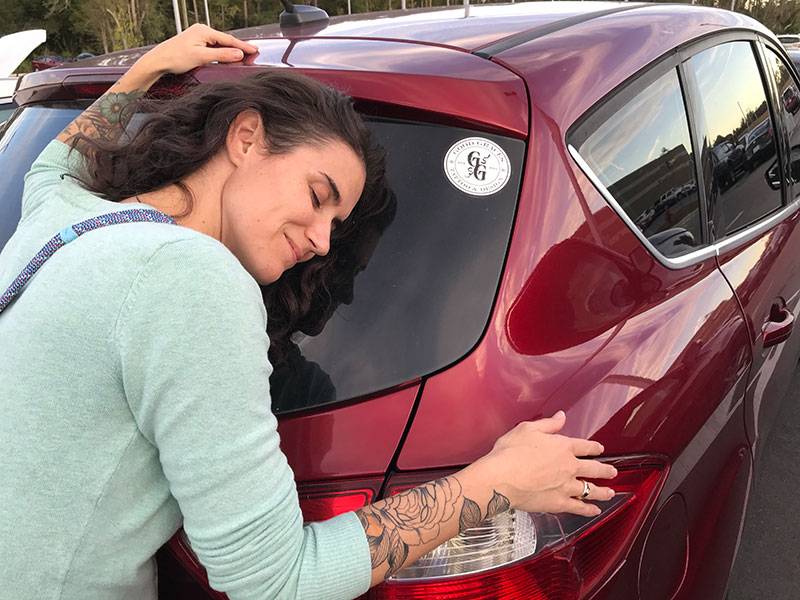 All this time, Tristen has had a red Ford C-Max. (Despite how this looks, we don’t have any particular affinity for Fords or any other car company.) It’s a sleek little hybrid thing, great little car. It was named Dorothy, after Dorothy Gale from The Wizard of Oz, because of Dorothy’s ruby red slippers.

Then Tristen got pregnant. No big deal because you can easily fit two carseats (one for Milly and one for the new baby) in a Fiesta or a C-Max.

But then we found out that the baby wasn’t a baby, but was two babies. We were having twins, and suddenly both of our cars were going to be very cramped.

Okay, so two small babies and a big kid. Third row SUV should be fine, right?

I traded La Plata in for a Kia Sorento with a third row. We traded the Fiesta in because Dorothy was a nicer car and, as a hybrid, got better gas mileage. The problem with that, of course, is that I had negative equity from two different cars all rolling into one loan. My goal was to get the monthly payment at a place I was comfortable with and get some extra room for my expanding family. We found that with a Sorento that I liked and so that’s what I got.

We named the Sorento Nikki. That was Tristen’s idea and I liked it, but you have to go down a rabbit hole to get to the root of the name. This was her line of thinking: The Sedona was red, which is rouge, which made her think of Moulin Rouge, which stars Nicole Kidman, Nicole, Nikki.

I really like Nikki. It’s comfortable, drives well, has plenty of features such as Bluetooth, a backup camera, heated seats.

If all five of us: Tristen, Milly, Fawkes, Phoenix, and I, were going somewhere around town, Milly could either sit between the twins or she could have the third row all to herself. The downsides were climbing over carseats or having to get in and out through the rear hatch, which you can’t open from the inside. The back was also a little cramped, but that wasn’t a huge deal for a small kid like her.

And of course, if the third row is in use, there’s not a ton of storage space in the back which made things on trips a little more cramped until my mom bought us a strap-on cargo bag that went on top of the car. It was a bit of a to-do to load and unload it, but it’s able to fit luggage for the whole family and then some and worked great.

Then along came Griffin.

So now we had four kids; three of them in carseats. Anytime we all went anywhere, Milly for sure had to sit in the third row, which made it very hard to do bring a stroller along, or load up a good amount of groceries. Loading all the babies is a bit of a pain since we have to reach one of the twins over to the middle seat. And it was very hard to get to any of the babies if any of them were upset or needed anything. And never mind having to have the doors swing out to open while we’re getting the kids in or out.

As much as I loved Nikki, I was wishing that I had just swallowed my pride from the get-go and bought a van. Vans are just so much easier and more convenient.

Dorothy was getting close to being paid off; somewhere under a year I think. I was looking forward to saving a good bit every month. But there were a few problems with Dorothy. The hood latch had broken at some point and was going to cost a pretty penny to fix. She was starting to sound a little off, too. And there was the possibility of the battery going out at some point.

Still, I reasoned that we’d be better off, financially-speaking, paying off the car and paying for any maintenance issues.

Tristen started talking about trading in the C-Max for a van. The Sorento, after all, had way too much tied into the loan to get anything decent on trading it in. I didn’t like the idea of trading in the hybrid and having two large vehicles though, especially when Tristen was going to mostly use it for driving to and from work. I mean, her work is only about a ten minute drive, but I’m the type of person who feels guilty every time I fill up a car with a tank of gas.

Plus Tristen doesn’t love Nikki the way I do, and that would become her main mode of daily transportation.

A week or two ago, I got a call from the Kia dealer where I’d bought Nikki. He asked if I still had the Sorento and said it was popular right now and that they might be able to give me more than usual for a trade-in. I figured that was just a sales tactic, but I decided to go see what was up.

I picked Milly up after school and she, Griffin, and I (the twins were at Torrie’s) went to go see what they could do. The only used van they had on the lot happened to be a tricked-out Sedona. It was only a year or two old and it was really nice. It was large, had heated and cooled seats, a heated steering wheel, two sunroofs…. the works. I really liked it, but I told them how much I was willing to put down (nothing) and what price I had to stick with. With all the negative equity, they couldn’t make it work, so I told them they could call me if they got something that might work.

By that time I was already getting on board with getting a van, obviously, but I was still wary of trading in Dorothy. Tristen started looking at vans on Carmax though and found one she liked. It was in Charlotte or something, so they had to ship it here for us to check it out. They also had a thing where you can upload pictures and info about your car and they go ahead and tell you how much they’ll give you for the trade, which she went ahead and did.

By the time we set up a time to go look at the van, I had come around to her trading her car in. I’m the one who will be driving it more, so of course I needed to make sure I liked it. We ended up looking at a few of them. I looked at a 2014 Chrysler Town & Country and a 2018 Kia Sedona. Tristen also looked at a Honda Odyssey I think before I got there with all the kids.

We decided to test drive the Town & Country (leaving Griffin with his Nonny at the dealership). We spent a few minutes fretting about where to put all the carseats (we wanted to go ahead and put them all in to see what the reality of it would be like) and ended up with the twins on the sides in the back with Griffin’s seat on the passenger side in the middle. Milly wanted to be in the back, but having the more permanent carseats in the middle made it impossible to get in with Griffin’s carseat, which we take in and out of the car. She decided to claim the middle row on the driver side anyway because it’s got USB ports right there.

I’ll say that I LOVED the interior of the Sedona. Tristen and Milly didn’t like it as much, but Tristen said she knew I’d love it because it looked like a Tesla, which it didn’t totally, but it was nice and sleek and modern. She was right enough in her assessment.

We ended up going with the Town & Country. It just made the most sense for us. It was a little bit older than the other vans we looked at, but it only had 17,000 miles on it, which is pretty crazy for a five-year-old car.

It also had a ton of features:

The only thing it didn’t have, which is a bit of a surprise and a letdown, is heated seats.

So between the features and the miles, it wasn’t worth us paying $5-6,000 more for the slightly newer vans. Tristen and I briefly talked about it after the test drive. I took Milly back to her mom’s then took the twins home while she, her mom (who did a lot to help us out- Thanks, Laura!), and Griffin took care of getting the van. Our payments are going to be a bit less than what we were paying on the C-Max, so while it’s not going to be paid off in the next few years, we will be saving some money on what we’re already accustomed to paying.

I should have taken Griffin with me, because he was overtired and cried the whole way home according to Tristen. I got the twins down without incident, although they didn’t have much of an appetite for their later-than-usual dinner.

And by the way, if you’re wondering what we’re naming the van, we haven’t quite decided yet. Torrie, whose van is named Van Gough (van go!), has had some pretty good suggestions. If you’ve got any ideas, feel free to leave some in the comments section.