Welcome to the Family, Hazel

Welcome to the Family, Hazel 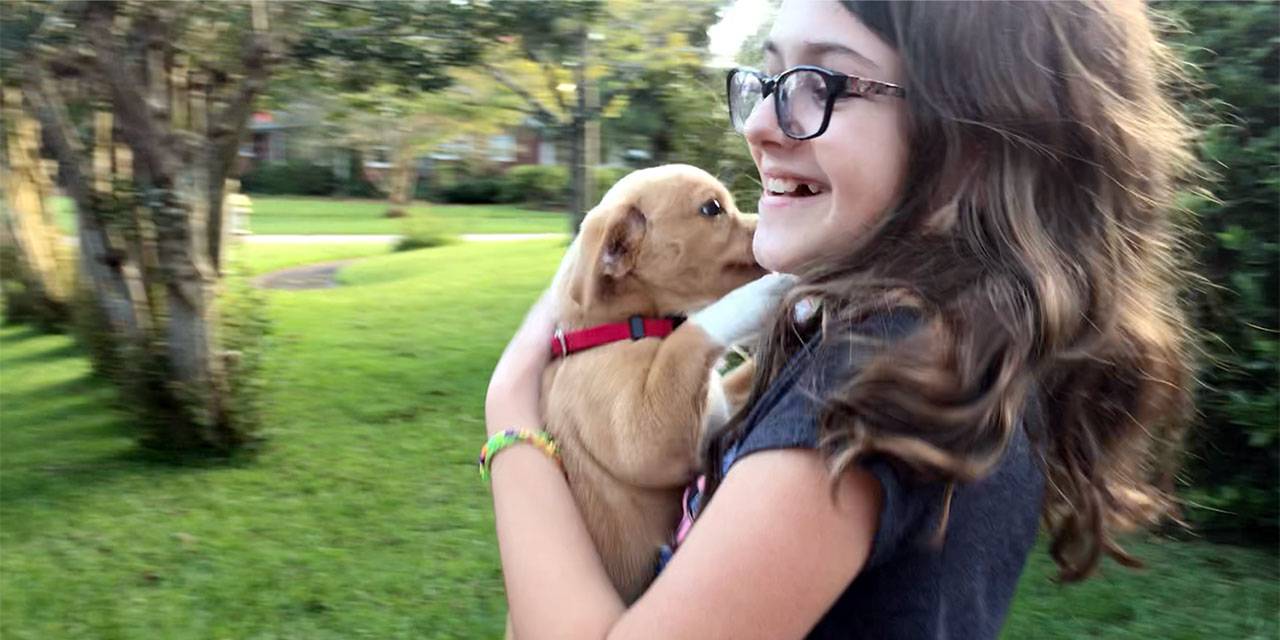 That Time We Actually Did Get a Dog

My day started off at about 5:40 AM. The boys were awake and Tristen had gone into the room–

Oh wait, you didn’t expect me to jump right into the getting a puppy part did you? Oh no, you’ll have to earn it. Read through and learn about the rest of my day until we get to that part.

That or just skip ahead.

As I was saying, Tristen had gone into the room to settle them down. I was trying to ignore them to let them settle themselves down. They’ve been waking up and trying to get up before their night light turns green, even though they started off doing such a great job with that. I think I dozed off for a few minutes, but I was up at 5:50-something because one of the twins and Griffin were making a bunch of noise.

So I went in and Griffin was standing up crying in his crib and I noticed Phoenix’s bed was empty and one of the twins was up and about, so I got in the bed and tried to coax him to come lay down with me.

And that’s when Phoenix opened the door and ran up to the bed all like “TA-DA!” (He didn’t say that, although they both do it sometimes.)

Yeah, two days ago Phoenix demonstrated that he figured out how to open a door. So that sucks.

But he ran in there all proud of himself and I literally exclaimed “WHAT!”

I hadn’t thought to look at Fawkes’s bed and it was dark and I was tired, so I didn’t realize that the twin in the room was Fawkes.

I spent a couple minutes trying to get them to settle down and get in bed, but Tristen went ahead and, using the app on her phone, triggered the green wake-up light and sound on the nightlight. I was initially slightly annoyed because I was hoping to get a few more minutes of sleep, having only gotten right at four at this point, but honestly it was a mercy that she gave them the signal to get up. There really wasn’t any more rest to be had. 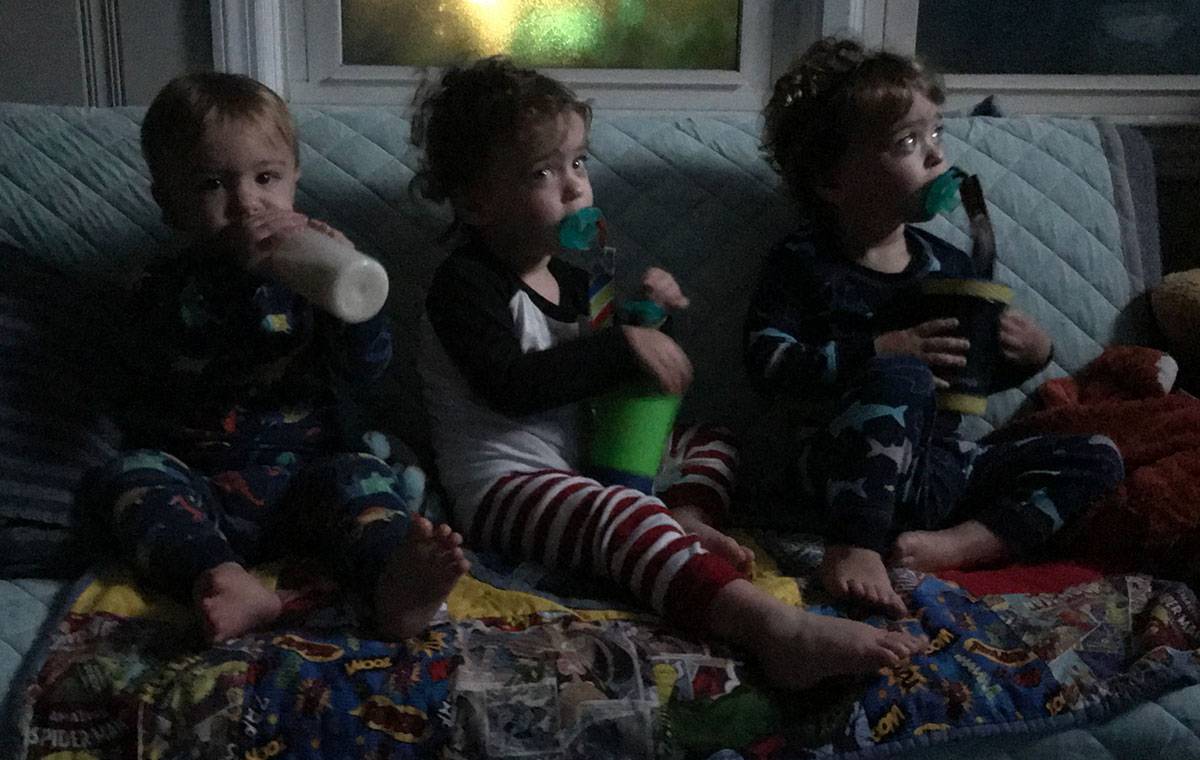 Milly helped out a lot this morning, just being around the boys and giving me a few breaks. Having gotten up so early, they were all ready for their first naps early too, particularly Fawkes and Phoenix. Griffin went down at about 10:40 I think and the twins were ready to go down around 11:30.

Milly was playing around with her iPad while sitting on the couch in the playroom and asked me to come up with an ad. It was rather on the spot, and I was floundering around to think of something when she told me she had started recording, so I blurted something out.

Milly asked to come up with an ad on the spot. She recorded it and then made this commercial for it. I hope you enjoy.

Now we can get to the dog stuff.

As I mentioned before, we decided to get a puppy. Our first attempt didn’t pan out, but Tristen was in touch with a few other places almost immediately. She had some back and forth with Freedom Bridge Animal Rescue and found a puppy who needed fostering and adopting, so Tristen signed us up to foster to adopt.

We didn’t think we’d be getting her for another week or so, but Tristen got a call and said that the family who was transporting her (she was living in Georgia) was able to come by this evening!

Milly normally goes back to her mom’s on Thursdays, but Amanda had her through Tuesday this week, so we tacked on an extra day for us. After talking to Tristen I talked to Amanda and told her what was going on with the puppy and said that we hadn’t told Milly yet and wanted it to be a surprise, so she agreed to let Milly stay here later as well.

Unfortunately it ended up not being a surprise for Milly because while talking on the phone to Torrie and walking around the house, Tristen mentioned the word “puppy” several times. I wasn’t sure if Milly, who was drawing or playing Animal Crossing in her room at the time, heard anything. When I asked her about it she not very convincingly played dumb. 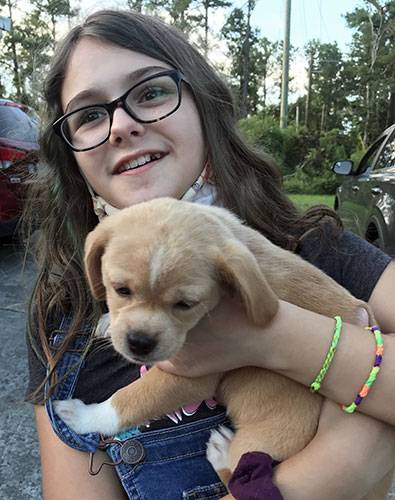 The people ended up getting here a tad later than we had initially expected, which actually worked out better in one way. We decided to introduce the boys to her one by one so as to not totally overwhelm the poor girl. With the time they were getting here, I was able to give the boys their bath and we had them mostly settled by the time the puppy got here. I say mostly because Griffin was uncharacteristically fussy when he was put in his crib and Phoenix was upset as well, even getting out of bed and leaving the room at one point (while everyone but me, who had gone to check on him, was still outside).

I think Amanda was annoyed at it being later than expected, but she didn’t make any big fuss about it to me.

Milly, for her part, wanted to stick around longer and I had to prod her several times to go get her stuff, then I had to prod her some more to actually leave. She’s looking forward to coming back on Sunday though. I took her back to her mom’s and when I got back, Torrie was at the house meeting our new puppy-girl. (She also brought us a childproof thing to put on the doorknob of the boy’s room, which I put on at the first opportunity.) The rest of the evening was spent letting Hazel explore the house and playing with her. 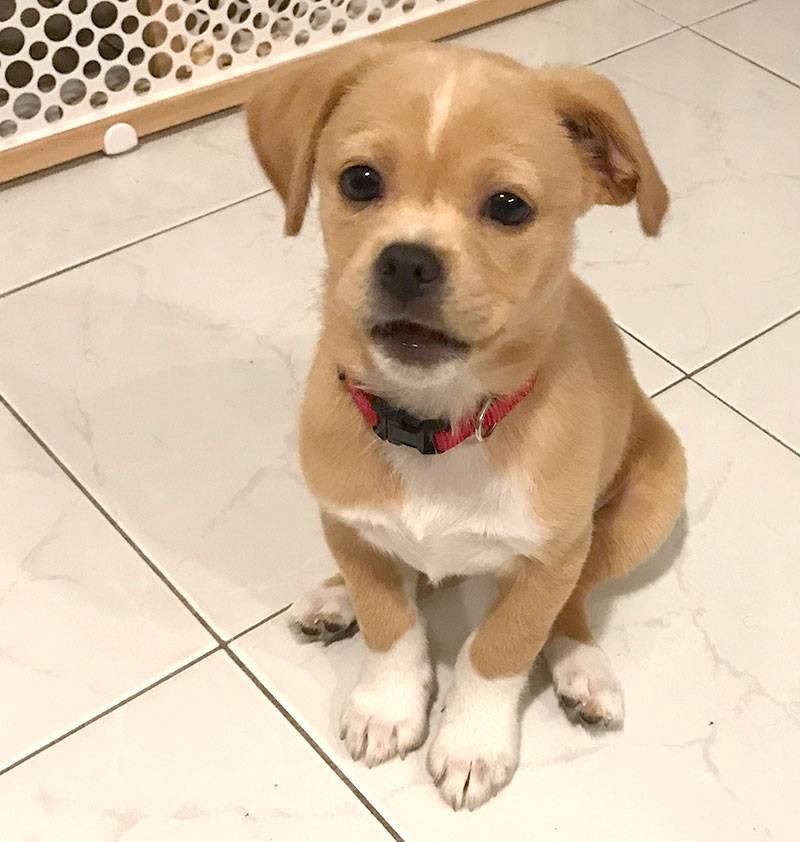 So how did we come up with Hazel? My brother Adam texted our family group text and asked that just a few minutes ago, along with other questions. So here’s the info on our new pup.

Her name was Luna, which isn’t a bad name for her. However, Tristen once had a Luna and Milly’s mom’s boyfriend currently has a dog named Luna. Tristen came up with a list of potential names that included:

There may have been one or two more. Hazel just felt right though, and since I wasn’t feeling Honey, that’s the one we decided on as a family.

She’s very playful and inquisitive, of course. She did pee a little on a rug already, but we were quick to take her outside and reward her when she did her business there instead.

Her records say her mom is a rat terrier and her dad is a pug, but they don’t really know if he’s a pug or not. Apparently he has a pug nose. So she’s a bonafide mutt. 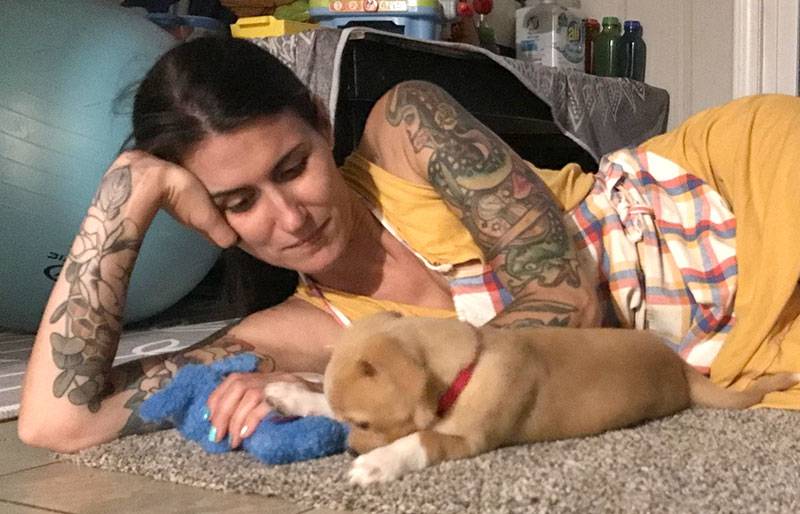 Tristen already bought a toy or two for her (well, I should say she technically bought them for the dog we thought we were getting last week) and she really liked this little fuzzy dog squeaky toy. I wouldn’t say she was playing fetch exactly, but she basically was, and she enjoys playing tug of war with it. I know plenty of dogs do this, but it she gets low and playfully growls when you tug at it, just like Bruce used to do, so I really enjoyed that.

We’re planning on crate training her and putting her in the crate at night, but Tristen, who has already gone to bed, is letting her skate at least for tonight because she was in the crate in a car so much of today. Right now she’s sleeping on a large round pillow (which Elmo and Duke used as a dog bed, but is technically kind of a reading pillow) on the floor at the foot of our bed.

Having just mentioned Elmo and Duke, I feel I should address something we’ve been asked by more than one person. So, yes, we had two dogs, and yes, we gave them away because we had so many babies. Elmo went back to my parents and Duke went to my sister, Erin.

Elmo has since passed on and Erin and her boyfriend, Daniel, love him way too much to ever ask for him back, and he completely loves them as well. 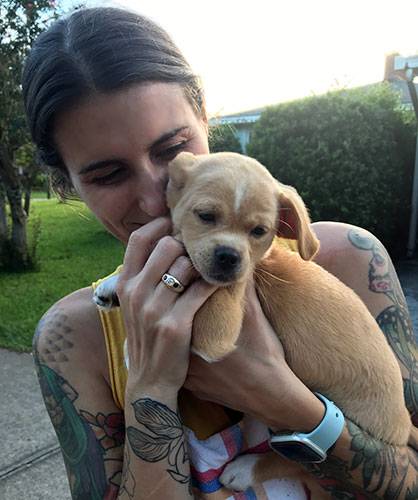 When we had Griffin, Fawkes and Phoenix weren’t even quite walking yet, so we had two babies who could barely do anything and another who really couldn’t do anything. It was a lot to keep up with.

Now though, all the boys can walk, Fawkes and Phoenix can entertain themselves to a degree, Griffin is starting to talk and can feed himself and drink just fine. Don’t get me wrong, they’re still a lot of work, but they can do things.

On top of that, Tristen noted how much the boys all enjoy playing with Duke when Erin has brought him over recently. We thought it would be great if they could have a dog who is smallish, but young enough for them to grow up with, but a bit more sturdy than, say, Duke.

Milly, Tristen, and I already love the new addition to our family, and I look forward to seeing how our boys come to love her too.