The Final Days of Summer Break 2020

The Final Days of Summer Break 2020 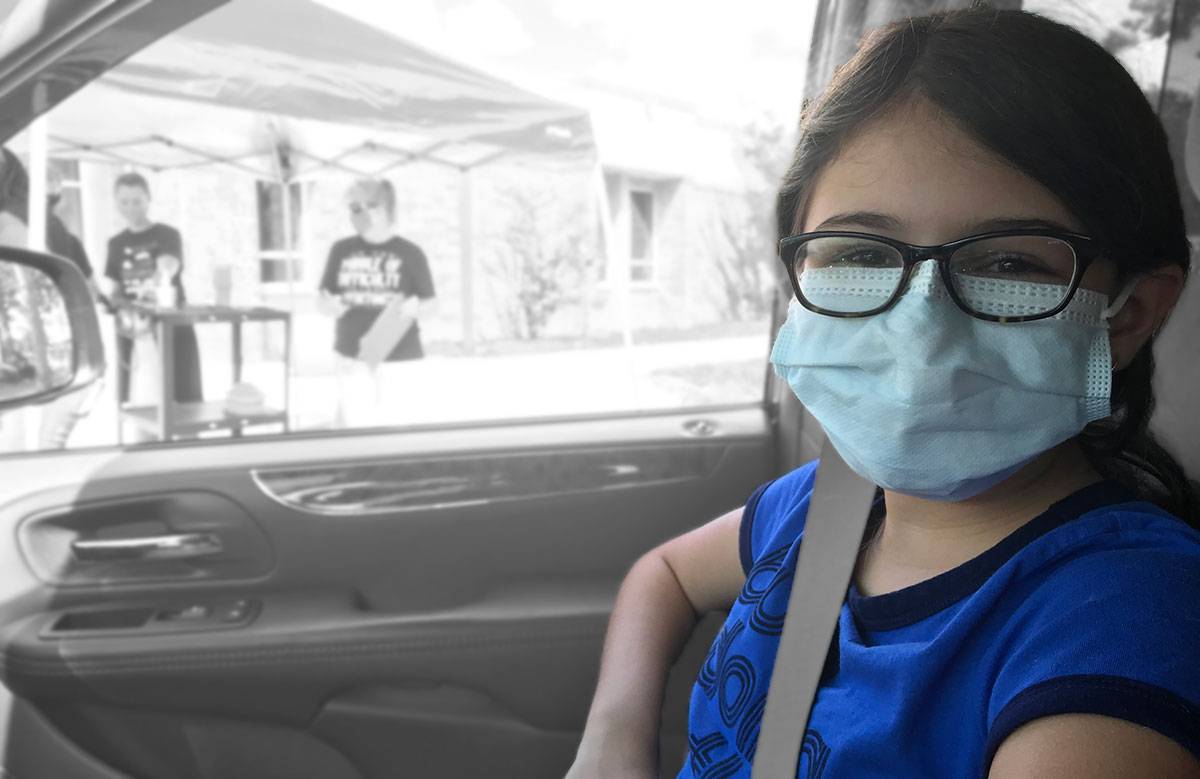 Today was the last day we had Milly before school starts. Before she starts middle school, I should specify. It’s been a bit of an odd summer with so much locked down and us trying to do our best to limit interactions and maintain social distancing measures. To that end, I’ve been a bit reticent when it comes to planning any play dates, plus a lot of places that would be fun to go aren’t open with the COVID going around.

It’s a tough juggling act with all her little brothers needing to be watched, and then with me trying to keep up with my work, but I tried to make sure to spend some time with Milly every day. I read to her most nights. We got through The Wind in the Willows and a good portion of The Wonderful Wizard of Oz. We drew together a bit here and there. We hung out and talked. I played games with her. We watched the first season of her favorite show, Gravity Falls.

I really enjoyed that, by the way, and told her I might not be able to wait around to watch the second season with her. She said that was fine, but she wanted me to call her after watching any episodes.

There were some things she didn’t really enjoy. I wanted to make sure she didn’t just play video games and draw the entire summer, so we had a few things for her to do each day, which entailed: eat breakfast, take a shower, brush your teeth, brush your hair, put on deodorant, spend some time with your brothers, read something, clean something (clean a room, wipe some windows, put away clean dishes), exercise, learn something, and eat lunch.

Now most of those are just normal everyday things that you should do anyway, but she’d skip almost all of them if left entirely to her own devices. I know because I didn’t bother telling her to do anything the first few days.

The “learn something” part became a bit of an issue. We came up with a bunch of topics that we put on small slips of paper that she would draw from a bowl. I’d even let her draw three and pick one. Some days I gave her a particular topic I thought of on the spot. All she had to do was read some articles and/or watch some videos, but by and large she hated it.

She did like some of them though. In particular she seemed very interested in the Salem witch trials, blood diamonds, and Venice. Once I gave her instructions on how to build and edit a website. She also learned about things like the effect of sugar on a body, the 1898 Wilmington coup, Rasputin, the Big Bang Theory, Edith Wilson, the explosion in Lebanon (she saw me reading the news and became interested in that). I gave her the option of picking topics, but she never took me up on that.

She really wants to get into art and illustration, and she’s certainly got a knack. She’s really surprised me with some of the things she’s come up with, particularly an image of a bunch of flamingos in lines on a canvas where each one had some decoration or something different about it. She’s been experimenting with her artistic style.

I tried to tie that into my desire for her to learn about all kinds of different things, telling her that the more stuff you know, the more well-rounded you become and the more inspiration you can get for stories. I don’t know if she bought that, but I think any professional artist, especially storytellers, will tell you the same.

Anyhoo, that was a bit of the summer. We tried to make the last couple days a bit of a send-off for her, but again, without having friends around she’s pretty much just stuck with family. 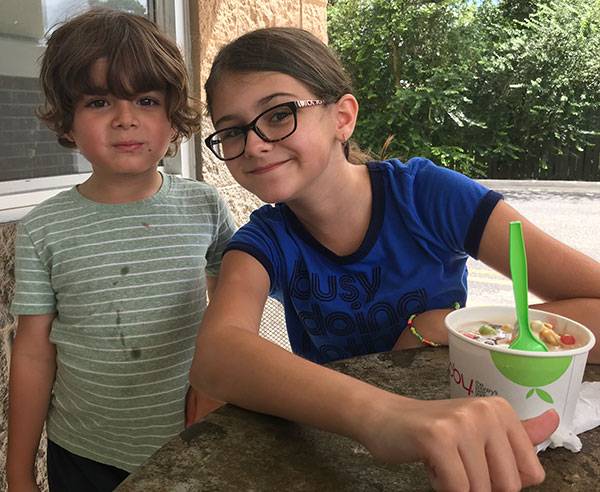 Yesterday we got ice cream from TCBY. Torrie used to work there and I’d take Milly there sometimes back when she was in Kindergarten and maybe first grade, but I don’t think she remembered it at all. We met Torrie, Sebastian, and Gabriel there. Milly and I got some froyo for ourselves and a small cup for her brothers to share. She just wanted to make sure she had some caramel to pour on her frozen treat, and she definitely got that (along with lots of other toppings).

After that we went to the “open house” for her upcoming sixth grade year. We drove up, gave a teacher Milly’s name, got some paperwork (a good bit of it to fill out), asked a few questions of the lady who collected the papers from us, and that was pretty much it. As I mentioned before, they’re starting the year with virtual learning. It looks like they’re going to be on more of a schedule than they were for the end of last year though. They log into their classes at certain times, so she’ll still get to have different teachers for different classes just like regular in-person middle school. The nice thing for her is that she won’t have to figure out how to get from Class A to Class B while somehow swinging by her locker.

We picked up some stuffed crust pizza on the way home for dinner (Milly’s request). Torrie came over after the boys went to bed and Tristen helped Torrie dye some of her hair, then they helped Milly do a bit of her hair. One of the questions Milly had asked at school was whether dyed hair was allowed, which it is. It’s a little surprising because the dress code is pretty strict there at her school.

After that, Milly and I spent some time as we’ve been doing most evenings of late and watched some Gravity Falls. 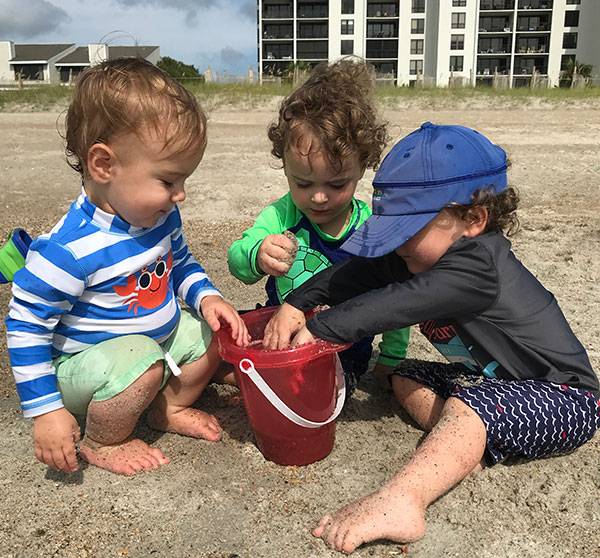 Today we had a beach morning. Erin came along with us. She and Milly went on a two-mile walk while the boys mostly played in the sand. Griffin hasn’t enjoyed the beach before today, but he had a decent time today. Phoenix loved wallowing around in the shallow water, but it was a bit rough. Fawkes wasn’t as enamored of the ocean, but did play in the sand a lot.

We went to the pool for a few minutes afterwards, but it was well past any normal nap time for Griffin, who fell asleep probably before we even got off the island.

Back home the boys all took simultaneous naps. Phoenix slept a little later than Fawkes and Griffin, but I didn’t let him go too much later as I didn’t want him to be too far off from his brothers. Tristen wasn’t feeling well all day and went to lay down after we got home too.

I was able to do a little bit of work, mostly emails and a couple phone calls. I did quit for a bit so I could spend the last bit of time with Milly before her mom picked her up. We didn’t do anything in particular, just hung out in the playroom with all her brothers, but I wanted to be around her.

Tristen took the boys to Torrie’s for a taco dinner. I hung back to get a little more work done before joining them. One of Sebastian’s favorite things to do lately is to play fight. You both have a certain amount of energy, then you do some moves on each other and tell the other person how much energy you’ve got left. He’s apparently very good at blocking and doesn’t lose much energy unless he’s beat you up pretty good for a few rounds.

We put the boys straight to bed when we got back, then Tristen packed up and left us all. Temporarily, of course. She had her latest tattoo done by a woman who moved from Georgia to Asheville a while back, but it wasn’t totally done yet. She’s scheduled it quite a while back. Anyway, she drove to my sister’s house in Gastonia (who is actually in the Bahamas right now, but my mom is watching my nephew and niece). She’ll get up tomorrow and go the rets of the way.

The Romeros (that’s Torrie’s family, for you newcomers) are actually going to be up there this weekend, so Tristen is going to grab a bite with them after she’s done then head back. I told her not to rush herself home, and if she felt like she needed to, to go back by my sister’s house and rest up there (even staying the night again) before heading back.

Hopefully I’ll keep my sanity until then.

PrevPreviousWelcome to the Family, Hazel
NextFirst Day of Middle SchoolNext